Posted on September 4, 2012 by lornpearson

On Sunday 2nd September I ran the Great Scottish Run half marathon for the third year in a row. Over 24,000 people entered this year which just shows how popular a race it’s becoming.

This year for me it was run with a bit of a twist as I was a pacer with a 2:15 target / 10:18 min miles. I did pacing at the women’s 10k and it’s a real buzz helping people to run along at a set pace or their goal pace. 🙂 On the morning of the run I got my pace band all ready. 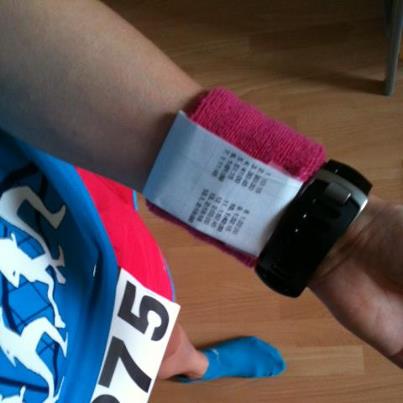 I wanted to help my good friend Pauline do her first half marathon (see her on the right of me in blue in the picture below) and since I was running at her target time of 2:15 I thought it’d be a good opportunity to offer to run as a pace maker too to help other runners. 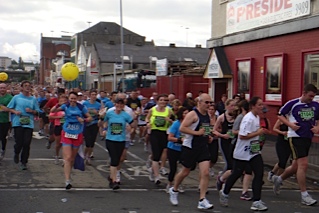 I’d also been lucky enough to publish my tip ten tips for the Great Scottish Run on the STV magazine website and on my blog (with pictures) so hopefully I helped some people with them and with my big balloon on the day. 🙂

If you read blog posts about my events before you’ll know that I like to put a bit of thought (and colour) in to my outfits for events. I decided on wearing my dark blue Saltire flag, along with my nice new race tech t shirt and my matching pink and blue shorts. Blue socks and pink sweat bands finished off the look and one of the sweat bands doubled up as a place to put my pace band too. 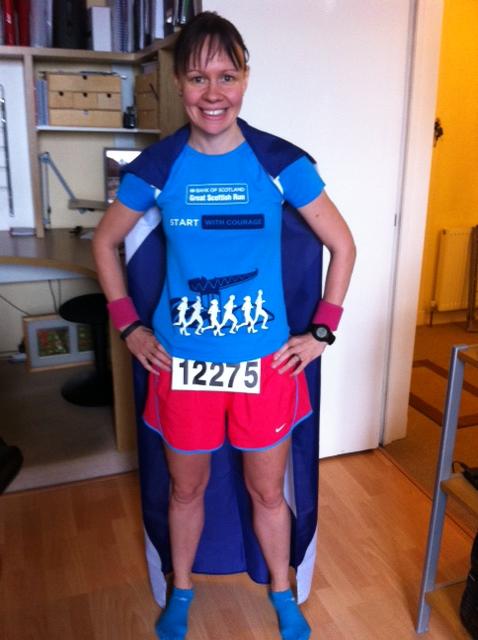 I think it’s nice to look silly once in a while (and apparently my scottish flag cape makes some people feel a bit teary and patriotic when they see it in a race). 🙂

After getting my pacing balloon from the City Chambers and doing a pee, I met Pauline close to George Square. We went into the start of the Green section which was the 2 hours to 2:15 section. Tight as anything, nerves abundant, I met Pauline’s friends Gillian and Carol too. All three of them were half marathon virgins and I was answering any questions they had and trying to put them at ease.

At the start we met a group of about four guys who looked like they should be in the pub. We had a laugh and joke with Paul and Wallace, who kept disappearing and reappearing by our sides for the first 4-5 miles.

The white and blue runners went off first, then it was our turn to go. 10 minutes after 11 we started our climb up St Vincent St. Before we knew it we were at the top of the hill and going down towards Argyle Street. You really don’t notice the first hill because you are too wrapped up in the event and the crowd.

We were all running comfortably together, Pauline, Carol, Gillian and I. 10 minute miles roughly for the first 4-5 miles. We were running along Paisley Road West when Wallace appeared again, this time with a can of Tennent’s he was guzzling… I was going to say ‘only in Glasgow’ but I’m sure it happens all over the world (perhaps not with Tennent’s though!)

Carol & Pauline before the start

THE MIDDLE
Gillian seemed to drift ahead a little and after a while I was running with Pauline and Carol and a few others who’d decided that they liked sticking at the pace we were doing.

I started asking people their names… and started getting chatting to people… Ann from Edinburgh, a guy called Hammy I think he called himself, a right Scottish looking guy who was looking down at his feet/ I suggested he look up for a more pleasant / efficient run, but he said he was talking to his feet to get them to keep going! I had a good wee chat with him then caught back up with Pauline.

It was a little crowded going through Bellahouston Park and Carol commented on the sea of runners in front of us. We got into Pollok Park about 5 miles in and we saw our first casualty. A woman ko’d on the ground having medical attention. It’s the one thing of two things I noticed running further back in the pack: 1. There seemed to be more people struggling / lying on the ground, 2. It seemed to be a lot more congested (compared to where I’d normally run – around 1:40 pace).

When we were running through Pollok Park I got my only bit of negative feedback about me being a Pacer: an older gentlemen grumbled at me when I ran past him just before the hill up to the Burrell Collection. He was gutted I’d overtaken him as he wanted to stay ahead of me. 😦 There wasn’t much I could do about that.

I was keeping pace around 10:00 – 10:20 minute miles through out but I was sticking mainly with Pauline’s pace so it wasn’t as accurate as it would have been if I was solely concentrating on pacing. She was however very steady and did well throughout. She took on two gels and quite a bit of water as we went along.

A special mention goes out to a couple of guys from Calton Athletic Recovery Group. Davie and John kept us company from Pollok Park right to the end. They started to be a bit noisy and annoying when we first heard them in Pollok Park, then they turned into an encouraging force (espeically John) who kept us well entertained on the run. He was chatting along to anyone and everyone as he went along, a few ‘Oggy oggy oggy’s and even put out a couple of verses of Caledonia just before the end in Glasgow Green. What a character! A proper Glaswegian if ever I met one!

Along the way I met a few others… Scott from Calton Athletic, Stuart who had stopped to walk and I told him he looked fresh enough to run again, another Stuart with a beard who started running again when I talked to him. 🙂

With just under 4 miles to go coming out of Pollok Park we ran up Titwood Road and Darnely Road before going slightly downhill towards the Clyde on Pollokshaws Road. We saw a few more people ko’d and getting medical attention and it made me feel very fortunate to be able to do what I was doing and run a nice leisurely run for me.

RIP AUBREY SMITH
I was helping Pauline along, carrying her water bottle and gels and I handing her a nicely warmed up gel at mile 9. 🙂 Running into Lauriston Road, we noticed a woman fall just before the water station… luckily she was ok and continued. At one o’clock when Aubrey Smith was reported to have collapsed and died we were around a half mile behind him. Once again, another reason I feel very fortunate and also a reason to enjoy running instead of pushing yourself beyond the limits, or even why it’s a good reason to run to your heart rate. Who knows what happened with Aubrey though – my thoughts are with his family.

We took a right onto Ballater Street… the stretch 12 miles in that I usually dread… I’m usually pushing myself and willing the race to end by this point, but as I was running 3 minutes a mile slower than I had in the previous years, so I was quite a bit more comfortable this time. My heart rate averaged at around 74% throughout with a peak of 88% just before the end. 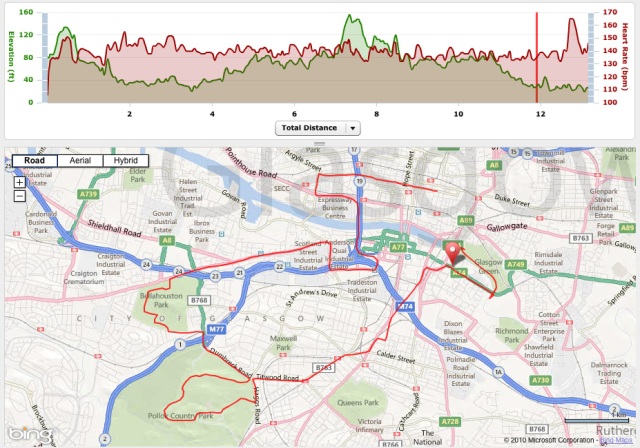 Along Ballater Street I met a girl called Claire who seemed to keep going ahead of us, then pulling up and walking with a sore leg. She told me she has a sore hip and was using me as a motivation to keep going and hopefully stay ahead of or with. I hopefully encouraged her along then as we turned into Glasgow Green I mentioned to John that a bit of ‘Oggy oggy oggy’ might help… and one person replied. As we ran along we met up with Ann from Edinburgh and a rather spritely Nicola passed us too.

As I ran along in the last mile I slowed my pace and went to the outside to let as many people pass me as possible. I had been on target for 2:15 but as I slowed I ended up finishing in 2:17:40. 🙂

I smiled for the camera around the last corner and kept on trying to encourage people in. At one point I looked back and noticed hundred of runners chasing me down. 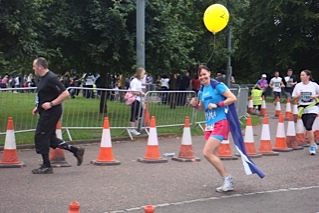 I slowed again (a very odd feeling to be slowing down at the end)…. enjoying the atmosphere and the finish of the event. As I ran in Kevin McConnell who had flown in from New York (and contacted me on Facebook) overtook me and said hello just before the finish line.

At the end I hung around to try to see some of the people I’d helped and encouraged but managed to lose Pauline! (sorry Pauline!) Pauline finished her first half marathon in 2:17:39… so she beat me by a second! Great run Pauline! (See Pauline and I highlighted in yellow below and Kevin McConnell in front of us). 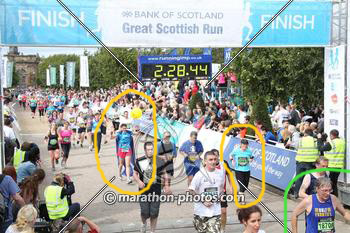 As I walked to get my medal and banana I met a very impressive woman… 65 year old Margaret Maguire told me she used to run half marathons and she decided on Friday (31st August) that she would enter the half marathon just to see if she still had it in her.

Margaret completed it (without any training) in 2:25!! I had a nice chat with her before leaving her to go and find her husband. I remember her saying her son didn’t even know she was doing it! She was very impressive and it just shows what can be done. 🙂 An amazing woman!

All over for another year… I had a great day and absolutely love having the chance to be a pacer at some of Scotland’s best running events. 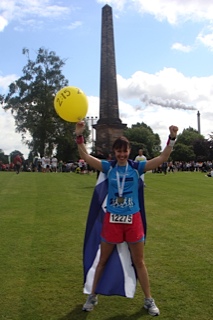 Afterwards I had to go home, shower, get ready and go teach swimming for four hours. And I treated myself to a Burger King with Strawberry milkshake just incase any DOMS were to show their ugly face. 😉

A good wee stretch at the end… although after 4 hours teaching swimming my legs were just a little sore.

And luckily the day after my legs (and whole body) were ache free…. another reason to take it easy and enjoy the scenery / atmosphere! Well done to everyone who took part and I can guarantee I’ll be back again next year! 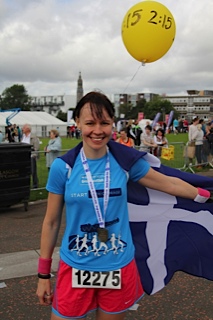 AND FINALLY – THE STATS
See the comparison below to show just how differently I’ve run the last 3 Great Scottish Run half marathons.

What a difference running 3 minutes per mile slower does (heart rate etc)! I ran with Pauline almost to the end, so the pacing was more reflective of her natural pace, rather than a set 10:18 minute miles all the way around, it was great to run with her and help others along the way. 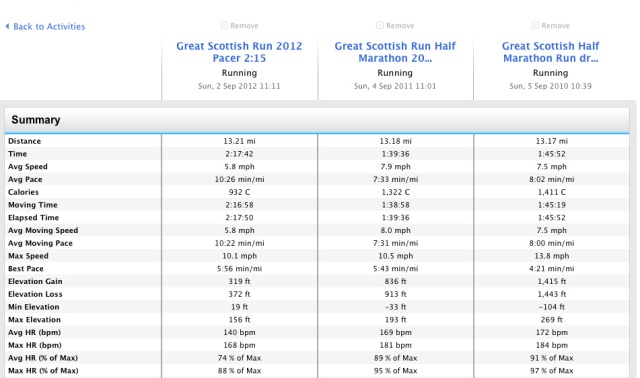 Here are our splits for the run:

And finally here’s a laugh for you, I couldn’t let that helium balloon go to waste:

Now I’m off for a well earned 10 day break to Lake Garda, so I’m afraid my blog and Facebook page will go a little quiet as I sun myself and relax in Bardolino and the surrounding areas. 🙂

Did you take part in the Great Scottish Run? Did you enjoy it and did any pace makers help you? 🙂

This entry was posted in Analysis, Special Event. Bookmark the permalink.