Posted on October 7, 2013 by lornpearson

There was a bit of a big hoo hah made this year… about how the Great Scottish Run would be on TV – BBC2 Sport coverage (you can see it here on iPlayer up to 13th Oct, if you  missed it).

So I wasn’t on the BBC :-(, but I did have a great time with many other runners.  I did get my name shouted out at the start by Bryan Burnett as I passed over the start line – I’ve already thanked him for that. 🙂

And I’m pleased to say that I, and the gang of 50 minute paced runners who were running with me, were captured by other cameras:

1. On the STV rooftop camera:
See the video here:
Did STVs rooftop camera’s spot you in the Great Scottish Run 10k
(about 24 seconds in, after the adverts)
Here’s some screenshots… 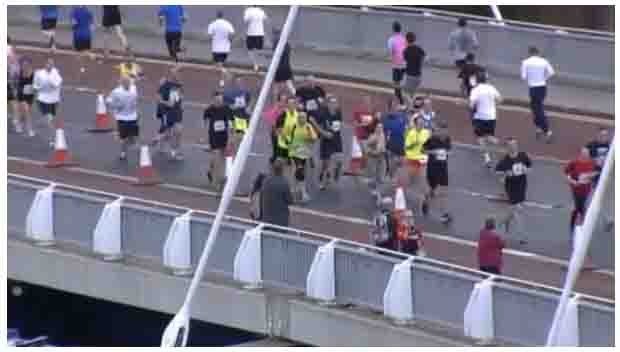 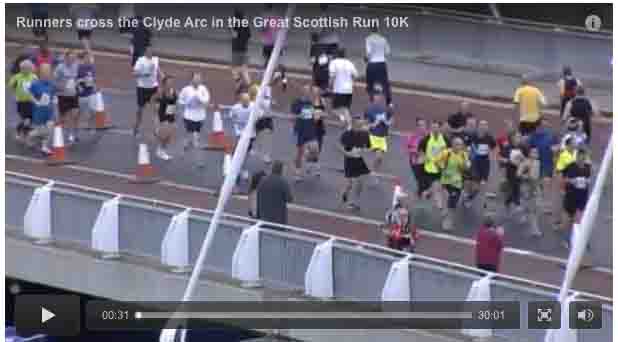 Cris Walsh is a very talented and experienced runner and Bellahouston Harrier and he happened to be injured this year.  So instead, he captured the event on video and supported from the sidelines.  🙂 (He also happens to be a very nice guy and a work colleague).
Again from about 25 seconds in … here we come… 🙂
GSR 10k – 50 minute pacer group at the Transport Museum

I’m sure more photos will pop up… on Marathon Photos soon no doubt…
And the results for the half and 10k are here if you haven’t seen them yet. 🙂

Now before I go I thought I’d give a bit of a shout out to this runner – Mr Hugh Turner.

Anyone who’s been reading my pages since last year might remember that when I paced the Great Scottish Run half marathon in 2012, I met and was very impressed and inspired by an amazing (65 year old) runner called Margaret Macguire.

Well this year, I wasn’t lucky enough to meet this guy, Hugh Turner. But I did see his picture in the Evening Times today and I thought he deserved a mention.

Hugh completed this years’ Great Scottish Run half marathon on Sunday 6th October in 2:49 bang on.

Wouldn’t it have been nice to see Hugh and his story featured on the telly?

I wonder how many miles his legs have run in his life?! 😉

This entry was posted in Challenge, Photos, Run, Special Event. Bookmark the permalink.