Tonight at Kaizen Run Club it’s all about TEMPO: Tempo runs are an excellent way for runners to build speed and strength. They’re runs that are done at a steady effort level and help you develop your anaerobic or lactate threshold, which is critical for running faster. 🙂 See more info on Tempo running here:http://www.runnersworld.co.uk/general/the-perfect-tempo-run/3176.html

Tonight’s run will be:

We’re going to run along to Glasgow Green then in and around the Green (3 times) and back. 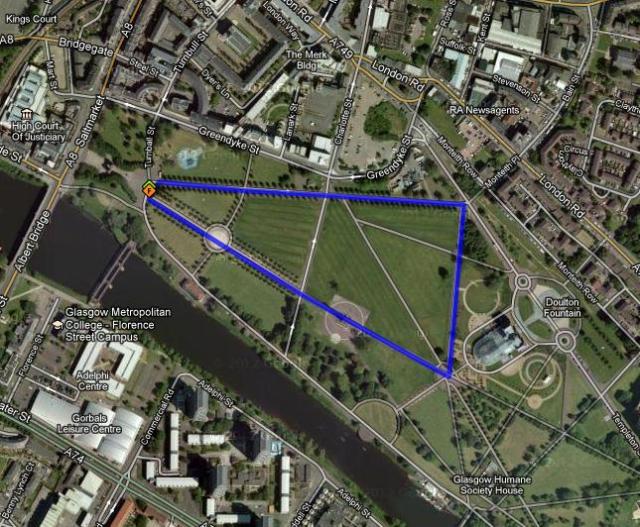 Here’s what we have planned:

Here’s what we did:

Out of the Marriott, acorss the motorway to Argyl Street, Elderslie Street, up to and into Kelivngrove Park, across Kelvin Way, over the road, up and down the hill at the back of Kelvingrove Art Gallery.  Out of the park, down past the old Transport Museum, around and down to the cycle path past the new Transport Museum, along the Clyde to the Millenium Bridge.  Over the Bridge past the BIP building, through Festival Park, onto Lorne Street, Squinty Bridge, then home along the Clyde side walk way and up Washington Street (Menzies Hotel).  5 miles in total.

Here’s the route for Tuesday 29th January – no speedwork, no hills, just nice easy get to know you, social running. 4.25 miles of it. 🙂

Along to just before you cross the road into Glasgow Green, along past the court at the Clydeside, West Street, Paisley Road, Mavisbank Gardens, Bells Bridge, then home. 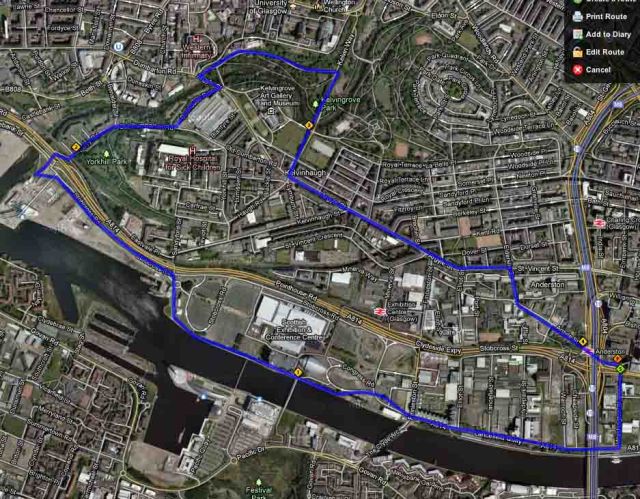 Sunday we start our long run training again, a chance to catch up and build on Tuesdays run by increasing the distance we run.

Some of you may have seen the weather for tomorrow – snow is forecast.  It will be cold so wrap up warm, but freshly laid snow will be ok to run in.

Tuesday 8th January 2013 sees our first Kaizen Run Club since returning from the festive break.  It looks like it’s going to be a busy one, so thanks for signing up. We have two options available for you:
1. 4.25 mile for those who have kept up with their running, and
2. a 5k route for those who haven’t been running or want to do a bit shorter tonight).

The aim of the run will be a nice easy, steady run, for you all to catch up with each other.  Don’t push it, just take your time and enjoy yourselves.  😀

Here are the route options for you:
(click the links below if you want to view / print the map)

Start at the Marriott > Turn right at Brown Street
> Left when you get to the Clyde (stay on the North of the river)
> East along the Clyde until you get to the bridge before Glasgow Green (Crown Street).
> Turn right across the bridge, then right in front of the court buildings.
> Keep going West along the Clyde front.
> At the Squigley Bridge, turn left to go onto West Street and right onto Paisley Road.
> Keep running until you get to the lights at Seaward Street
> Then turn right into Mavisbank Gardens.
> Right at the roundabout.
> Along to cross the Bells Bridge.
> Then turn right and run home to the Marriott, up Washington Street (past Menzies Hotel)

If you’ve not been running much, we’d still like you to come along, and you can choose to shorten the run by crossing the red and white pedestrian bridge on the way out, and the Squinty (or Squigley Bridge) on the way back. 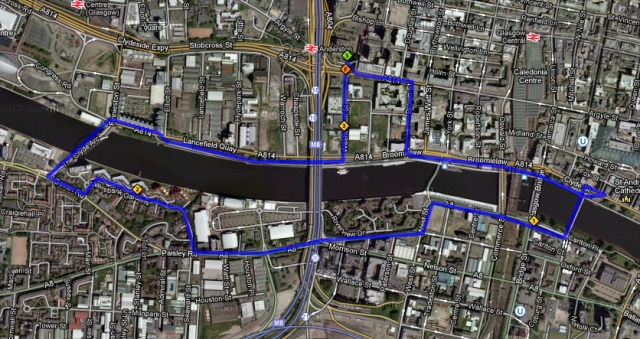