Well here goes… here’s my totals for 2020, after what was an odd year… there were some lovely sunrises when out on my bike.

… working from home since March… injured from late August to mid November… but cycling and walking instead of running… focusing on trying to shift some weight in lockdown … and it worked … I dropped about 10-11lbs in 5-6 months.

I did less steps than usual… previous years have been up at 5 million or 4.7 million… or around 14k to 13k a day. This year I did just over 10k steps a day, with less running (and more cycling).

My active calories were quite consistent, lowest in February when I did just 61 miles running, highest in January, and steady throughout Summer when my training was going well.

So here’s my mileage and activity totals:

I ran most in January and July… but think I pulled a muscle in the gym in late July, which meant I needed to come off running to try to fix it. In newly back there with it, after some rest from running, and building back into it with physio and running.

And I did 116 strength / gym workouts, including foam rolling – so about twice a week.

Then there’s my weight… it’s gone down down down up up..

Here’s the graph… in March when working from home I took the opportunity to track my calories and see what a focus on not eating too much (not being greedy) could result in. And it worked well – I shifted some weight and body fat.

Then from June onwards I decided to eat more of what I wanted, still keeping the training hours, and I still kept the body fat off, but have increased my lean mass again. 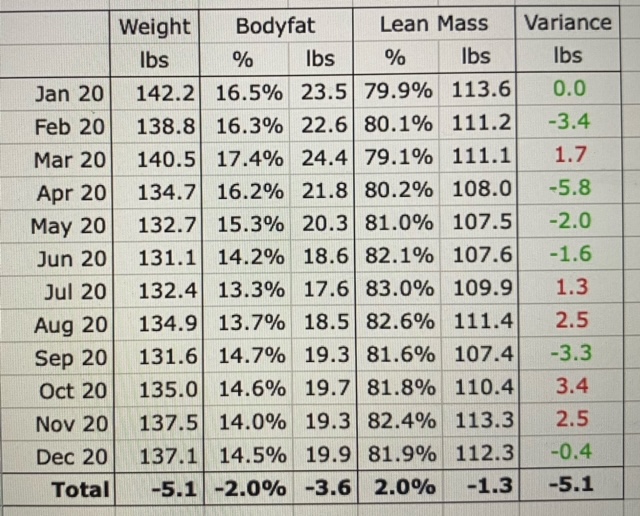 At my lowest I’d dropped about 10-11lbs, now I’m back to a drop of around 5lbs in a year, and my body fat has stayed pretty steady for the last half of the year. Lean mass back up from probably keeping up the activity and being in the gym, and eating plenty.

Here’s my all time weight graph… (for the last 6 years)… it’s been going up and up and up until in 2020 I figured out how to shift it if I wanted to (consume less!)

But I like my ice creams, chocolate and my food, so I think I’ll stick with it as I’m doing it… plenty activity and plenty good eating too.

I’m feeling good on it, and I’m happy that I managed to keep being active on the bike, in the gym and with strength work in the latter stages of the year when I was injured.

This year has definitely been the year where I’ve embraced the cycling and been in the gym more… and out and about walking more too… and my running mileage wasn’t all that far below my usual of between 1000-1200 a year.

I have no idea what 2021 will bring, but I’m pleased to have reached my 2020 mileage goal, and I hope to continue with my cycling, mix in Apple Fitness workouts and keep a balance between it all… including rest, fun and some more holidays away from Glasgow / staying local hopefully!

And plenty coffee, mars bars and ice cream to keep me going.

What numbers did you achieve this year?

Happy New Year when it comes!