We were treated to this sight last night just before bed around 10pm… the sun setting in the west, and rain in the east, led to an evening rainbow and sunset, for most of the west of Scotland it seems. I have friends in Erskine and paisley who saw it too.

I had another good sleep … just short of 10 hours… my sleeps are much better or longer in lockdown… and I’m feeling better for it.

I was up for about 9am and had a couple of black coffees, a good breakfast, Some water and and then a tropical caffeine shot to fuel me up for the run.

I planned 10 miles, and decided a run into the Southside, on the outskirts of pollok lark, then along and over to the bottom Clarkson and down Cathcart road to the Clyde would be a good route. Nice wide roads where I could shelter in the shade and also socially distance fine.

It was warm and sunny, but I managed to stick to the shade most of the time. I nearly had a wee clash with a cyclist when I ran onto the road going the same way as I was running, but he saw it coming and called out to prevent me getting in his way.

I was wearing my purple Nike shorts and red and white vest, along with my new favourite trainers, my yellow nike zoom fly 3s. They’re very comfy. 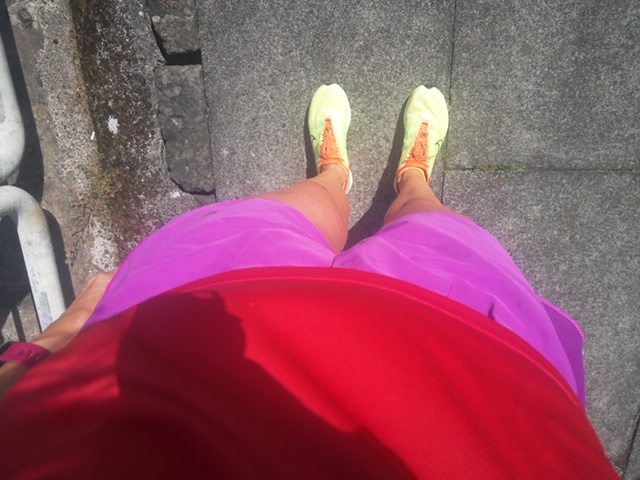 On the run today I noticed a few walkers getting out of my way this time, going on the road so I didn’t need to when it would be them who would walk into the traffic. I thanked them. I managed to avoid everyone on this route, mainly due to the side roads. It’s good to run into the traffic where you can too, in case you need to hop on the road.

My run was planned as quite a tough one:

Here’s how it ended up pace and HR:

On the first effort section, I was going slightly uphill, but on the second effort section it was mostly running down Cathcart road so I had the benefit of that. I was ticking along with my heart rate creeping up to 170 ish and feeling strong, even 6-8 miles in.

I used to live up that area so I know it well. And just after I started that second 2 miles of effort I noticed a guy in blue running about as fast as me behind me. He was keeping his distance but I was aware of him. He gave me space to distance from people, which was nice of him.

After a mile or so he caught up with me and we ran apart but chatted. Michael was doing a long run and although I was beast it it I was still able to talk a little – the downhill probably helped. At the Gorbals my 2 miles was up, and my heart rate was up at 171, so I let him go and said I was on a recovery now.

I walked for about a tenth of a mile to let me heart rate come down to 150 ish then started up again. I ran along the south side of the Clyde then over the Squiggley Bridge and in the shade again next to the bus lane.

I’m getting quite used to this bit now, with all of the walking and running I’m doing locally, and finding the best ways to avoid people where I can.

It ended up being a nice strong run, and I finished bang on when I expected to, about 1130. Afterwards I had a vanilla sis rego shake, and some water, and a stretch and shower. Then we went out a wee 35 min walk locally to stretch the legs. 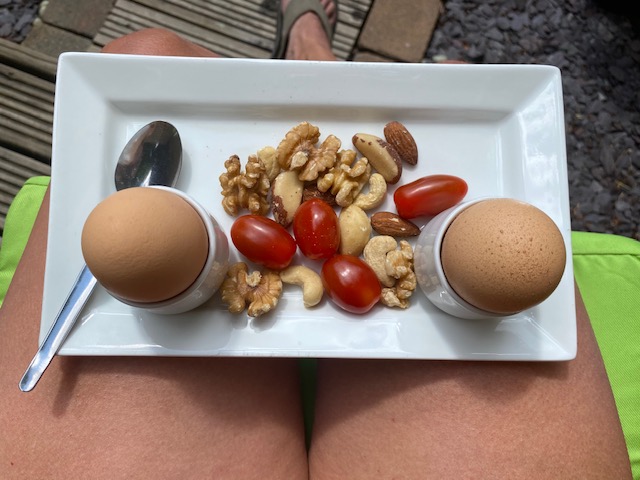 Not long after I had a couple of boiled eggs, nuts, tomatoes and dairylea light slices rolled up to dunk in the eggs. Yum.

I finished my run along the front of the Clyde … adding on the last 0.2 miles because I could. I might do intervals there again next week… it’s a nice wee spot. Now for some sunbathing this afternoon I think. It’s nice and warm when the clouds go away.