9.5 miles not really in the rain

I woke up this morning to the first day of rain in a long time. I was nearly put off going for my 9 mile long run, then I remembered, I don’t melt when it rains. I had a leisurely morning, did some bits and pieces, then had my usual breakfast and a couple of black coffees.

By about 10am I still wasn’t up for running in the rain… and toyed with the idea of doing a session in the (dry) gym instead. I pottered about a bit more, including noting down my stats for the week / weight and measurements etc.

I measured my waist and hips and saw that in 6 weeks I’ve lost 3cm from my waist and 4cm from my hips. I’m down about 5-6lbs still, and even with a couple weeks of easing off / recovering, things are going in the right direction. 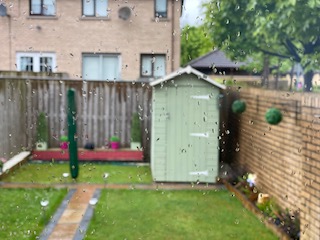 After that, and once my breakfast had gone down, I felt up for a run. The rain had gone off a bit, and by 11:15 I was in my shorts, T-shirt, white waterproof and cap, and trainers and out the door for my run.

I decided after sort of failing to social distance by going into Pollok Park last week, I would run along Paisley Road West and back to do about 9 miles or so. It’s not the most awe inspiring route and it’s also pretty flat, but the roads are wide, and I’m able to get onto the roads to be able to socially distance, so that’s what I did.

Out for 4.5 miles, against the wind, and the little rain there was, then a turn and back for 4.5 miles strong / at marathon heart rate pace (with the wind behind me too). It wasn’t really raining much, or not that you’d notice anyway. With my cap on, and then my jacket on until I took it off at 6 miles, I was dressed fine for it.

At about 3 miles in, I passed Martin with his two dogs, but I don’t think he recognised me. Then just after that I ran along side (me on the road) a colleague JJ from work. He was dressed in every day clothes and as if he was running towards his car for a shop. 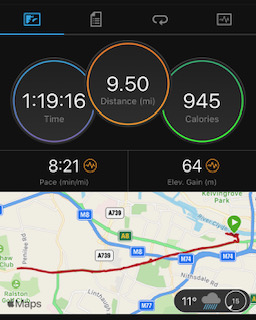 I was on the road away from him, but we were both going in the same direction. I said hello and asked him if he wanted a race, lol. He was a little surprised to see me, then took me up on it and we sort of raced to the corner. I think we might have made each other’s days a little. Ha.

After that I was running along Paisley Road West, thinking I could pop by and see Debbie, as I was very near to where she lives, but of course I decided against it. Booooo. I then noticed all of these nicely done drives, many the same as if a builder or landscaper had got loads of business from the same street.

I managed to avoid everyone I passed, usually by me hopping on the road. Twice to avoid people on bikes who were on the pavement… grrrr. And there was only one clash I had, with a taxi who was starting to move into the inside lane, when I was on it so I could avoid another pedestrian.

I tried to gesture that I was trying to be 2m away from the other person, but him in his car would likely think he was right. I was in bright colours anyway and he wouldn’t have missed me.

After turning around I sort of had the wind at my back and was feeling good. With breakfast, a couple of coffees and a SIS caffeine shot in me, I decided not to take the energy gel I had with me. At about 6-7 miles I took off my jacket, and wrapped it around my waste.

I was at marathon heart rate from about miles 5 to 9 and feeling good. Finished off with a short 0.5 mile cool down near my house. I ended up doing a negative split, 38 mins out, 36 mins back. 5.0 garmin aerobic training effect.

All in all a good run and I’m glad I remembered I wouldn’t melt in the rain (there wasn’t much of it after all). Eggs for lunch and a rego sis milkshake for recovery too.