Today’s long run felt a bit harder than last weeks… it was the same distance, and I ran it 14 seconds faster this week, but with a lower average heart rate.

Last weeks was uphill for the first half, then downhill for the last half, and it was easy to be distant from people on the wide roads coming back from Newton Mearns.

Today I ran to Pollok Park and did loops in there. For the most part on the side paths it was easy to be distant, but sometimes it wasn’t as easy, and it’s the reason I’ve been avoiding parks for runs.

I’m very careful to give way to pedestrians, and give everyone a wide berth, but sometimes on the smaller paths it’s impossible. Or the behaviour of others (not giving distance) makes it harder (and frustrating).

People on bikes (note not cyclists) can also be a little annoying – perhaps they don’t know their Highway Code or cant control their bike at speed, or they simply get too close. Anyway… for the most part it was ok today and the park wasn’t all that busy really. All of the car parks are blocked off so really it should just be local people in and around it.

Having done 15 miles last weekend, I had planned on building and doing 18 miles today but decided at about 11 miles that 15 would be more sensible. I’d fuelled well before the run, but felt a little sick after my first gel so opted not to have my second and I didn’t feel up to grinding another 3 miles just for the sake of it.

I chose to do loops so that I stayed more or less local myself, and didn’t cover too much ground. And I chose a route that was quite undulating, with a few good downhills and some ups too. A better route would probably be a sort of our and back where you can hop on the road if need be to avoid people.

I stopped at about 4 miles to take my long sleeve off, take a gel and do a pee in the bushes (!!), then I got on my merry way and enjoyed the sun, scenery and the birdsong. It wasn’t the warmest, but I probably could have worn shorts instead of capris. The sun made up for any chill in the air.

I stopped and had a breather a couple more times, at about 10 miles and 13… bits were starting to get sore – my hips, the top of my right foot… a half marathon in about 1:50 again, I ran down towards the Clyde and looked forward to a bath or maybe a shower afterwards. 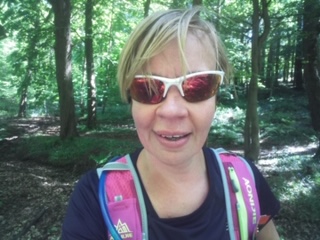 Now in the garden to cool down, the sun is really warm, the wind and cold is hardly here and it’s inviting me to maybe get a bit of vitamin D as a reward.

Last week I didn’t train as much as I had been, but took it as a rest week. Plenty walking and enough running ahead of today’s long run. This week I’ll recover from this run then plan in my other runs and gym sessions alongside work. 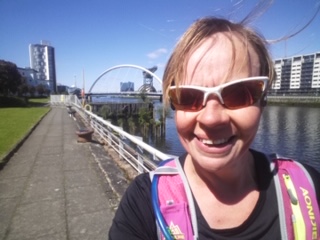 Here’s me at the end, glad it’s over and probably full of endorphins to make me smile.

I entered the Brighton marathon for April 2021, and it’s hard to see how I’ll get back to being up to doing 20 to 26 miles going forward, but I know how to do it and it’ll be a good challenge.