Today I ran the Nigel Barge 10k for the first time and it was good. It takes place in the Garscube estate, which isn’t far from me, and it has plenty parking and was well organised.

Run by the Maryhill Harriers it’s been going since 1943 and was set up in memory of a soldier who died in the Second World War. It’s been going for 77 years then, and the running club is even older.

As one of the first events in the race calendar, it’s popular with running clubs from across Scotland, and I saw a few club vests from England too. There were about 230 runners, and most of the route is run on tarmac, a double loop, and some of it near or on open roads.

I was warned at the start that the route is very hilly. Horrible hills… and hills there were a plenty. I found it was good that there were two loops as you knew what was coming next by the second loop, and the last km was more or less downhill.

The race started a couple of minutes before 12am – enough time for any icy patches to be thawed out, and enough time for my breakfast to have gone down. I took a sis caffeine shot an hour before the start (150mg caffeine) and got my number around that time too. Number 37.

We all went up to the start about 10 mins before 12, and I felt ready but a little of the usual race nerves. We’d walked a bit of the route, and I didn’t have any pressure on myself to do any time in particular. I just wanted to run and not push it too much, and see what happened. 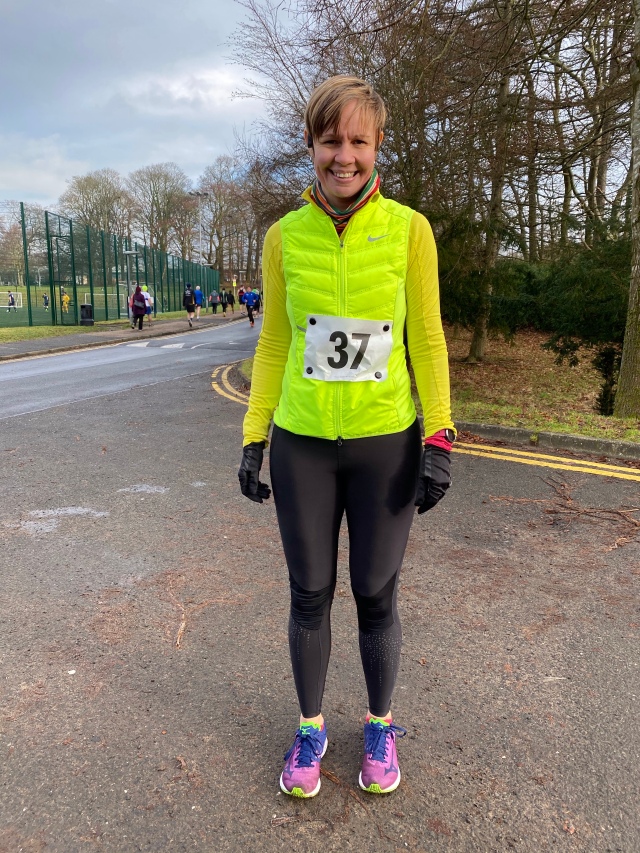 I thought I’d maybe try to keep my heart rate to below 160, but it ended up with the hills, going up to 170 ish on some of the uphills and I tried to keep it to between 160-165 the rest of the way. I’d wrapped up pretty well and it turned out it was just right for the conditions – 4-5’C but calm and clear. 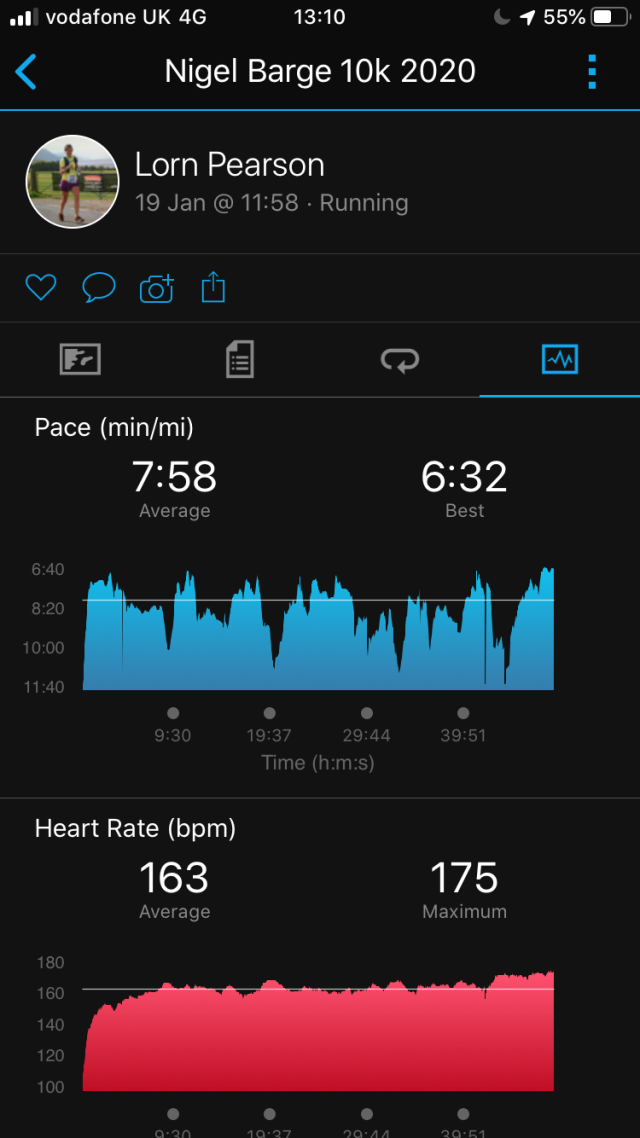 The first mile ticked off fast, about 7:42 min miles – a wee downhill from the start line. It was a little congested in the first mile or so, but probably a good thing to filter the runners through.

It all felt fine, until the long slow hill up past the vet school. It seemed to go on forever… and I felt quite relieved at the top… not only was the lead marshal there, but there was a medic assistance car at the top too. There was quite a good bit of crowds cheering us on too.

Then came the next nice downhill… a bit of recovery after the uphill, I checked my heart rate, around 163… and I let go a bit on the downhill towards the car wash at the bottom. A sharp left, past the canal, then up another long slow hill.

On the hill I passed a young female runner who’s lace had undone. School girl error I thought… double knot! But she bent down and tied it quickly and then ran ahead effortlessly, carefully going onto the road past the runners ahead of her. She probably didn’t lose much time.

A marshal at the top again and a sharp left, on up again, before crossing a road and finally getting a downhill into Dawsholm park (that I didn’t really notice) until it became a bit steeper. Through a muddy bit, (I was glad I didn’t wear my new trainers), over a bridge then up another steeper hill. 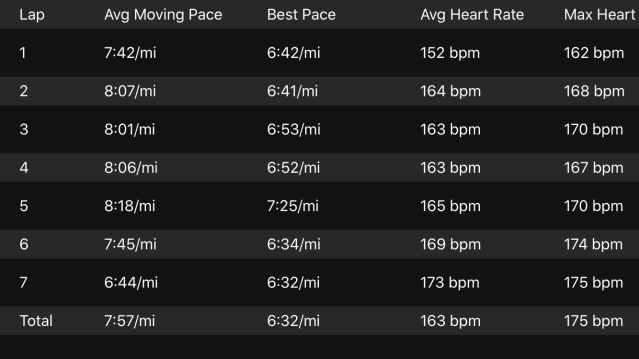 At the top and a female marshal, my HR was about 171 by this point and I took the next downhill section towards the half way mark as a good recovery. (But I remembered it for the end). So much for not pushing it… see the splits and heart rate above.

Past the half way mark and my watch said about 24:30, so I thought I’d likely be finished around 50 mins or so. I was feeling fine, and kept ticking along. Down through the now less congested start, over the bridge and up the long slow hill past the vets again. I do slow down on uphills, but more so I don’t overdo it. And I try to take advantage of the downhills when they come.

There it was, gratefully up the hill and past the medic car again, I was working hard, but knew there was a good downhill on the way. I flew down it this time, overtaking a guy who possibly didn’t know where I’d come from. Wide strides, hoping to let gravity do the work for me. 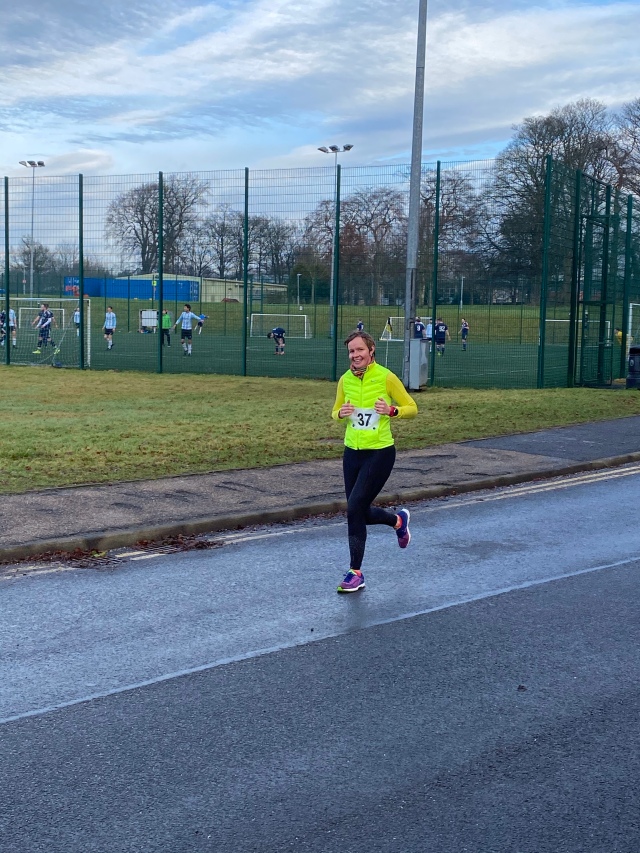 A sharp left guided this time by three marshals so you didn’t fly into the road ahead. Up the next slow hill again. Arg. Around the corner again and this time there was more traffic, and I was conscious j had a crossing ahead, but I got across it fine.

I noticed the downhill into Dawsholm park more this time around and I opened up my legs again, into the park again, mud again … and then my left trainer started to feel loose … ahem … they were double knotted at the start, bit before I knew it my left trainer was untied, laces flying. The only thing I could do was stop and tie it. I stopped my watch and counted the seconds in my head … 10 seconds – and I was up going again. Doh. Oh well.

A female runner behind me caught up with me, and we powered up the last hill together. As with my usual form, I didn’t push it too much and she overtook me. Past the female marshal again, and left onto the main road. With 1km to go I knew it was all downhill from here.

My HR was 168, but I tried to ignore it and just went to run strong for what would be the last 5 mins or so. My watch was at about 44 mins so I figured I’d get around 49 mins or so.

I careered down the hill, seemingly effortlessly, past the lady who overtook mr on the last uphill. Onwards and I passed another woman who I’d been following for a while and I’d noticed had a jimmy Irvine 10k top on.

Not far from the finish, a car tooted at us, and I passed a guy who was walking before he got seen before the finish. I over took another woman, then the walking man overtook me (effortlessly it seemed, the walk must have done him good).

In towards the finish and the distance was spot on. I stopped my watch at 49:20… it will likely be around 49:30 official… 40-50 seconds slower than the Jimmy Irvine 10k in November, but my HR this time was a bit lower, so I likely didn’t push it as much as I did in November.

I finished and felt pretty gubbed but recovered quickly. I was pleased with how it went.

Afterwards I got my medal, a banana, some water and a caramel wafer. Some stretching and recovery ahead of a bath later on. 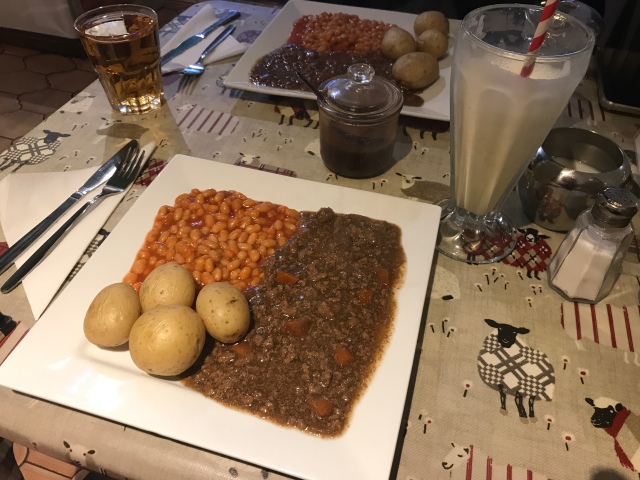 Then we went to the Tea Garden in Partick for a nice hearty portion of mince and tattie’s and beans..: with a banana milkshake for me.

A good wee well organised event, a nice route, and close to Glasgow with plenty parking and plenty up and down hills – or undulating as described.