Ken the king of the Kelvin & 11 miles

Today my 10 mile training run turned into an enjoyable comfortable 11 mile run. I took my time getting up, had my breakfast, a coffee and some water and took a SIS caffeine shot (150mg caffeine) as I watched The Nine from last night on iPlayer. John Beattie and Laura Miller make a great pair, I think.

Watch The Nine on the iPlayer… http://www.bbc.co.uk/iplayer/episode/m0002x0k via @bbciplayer 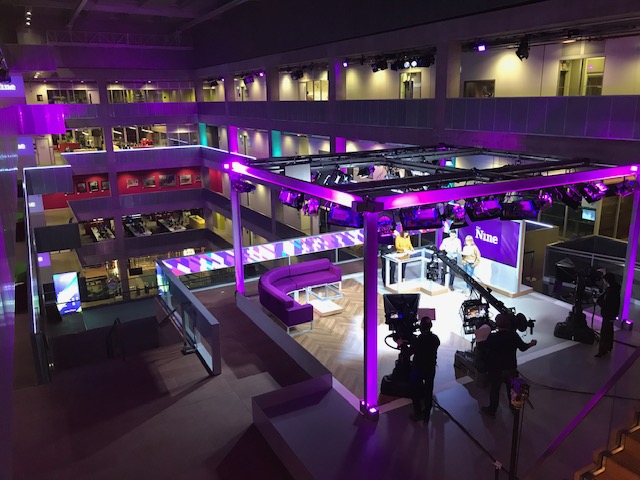 I woke up this morning thinking I could put the run off til this afternoon, but with the weather turning later, it was best to get it over and done with. And I’m glad I did. I was going to run to Pollok Park, then when I ran out from my drive, I decided to take a jaunt up the Kelvin instead. Maybe an out and back… maybe something else, but up towards that way anyway.

I put on my shorts, compression t, long sleeved top and gilet, and got my iPod and bone conduction headphones on. I decided I’d listen to my audiobook ‘The Luck Factor’ by richard wiseman. A really good book, I’d recommend.

Anyway, I was listening to the book, and it was saying how extrovert people tend to be luckier. Those people who interact and speak with others, tend to have more luck than those who keep themselves to themselves. I smiled and agreed. T

I do consider myself a lucky person, and there are so many bits in the book that I relate to.

Sometimes a chat with someone else can open up an avenue you hadn’t thought of, or you can brighten their day up, or even change their path or life.

So there I was, running along side the Kelvin river, 4 miles into my run. I looked over to the left and I saw an older guy who looked like he was in the middle of a workout, but looking a bit fed up. In his Nike tracksuit, white hair, definitely in his later years.

I stopped my watch and decided I’d go over and talk with him. I went over and introduced myself as someone he didn’t know, but said he looked a bit fed up, and was he ok.

He told me he was at the start of getting back into fitness and he was no where near where he wanted to be. I said we all need to start somewhere. Then we had a nice chat for about 10 mins.

It turns out his name was Ken, and when I asked him if he didn’t mind me asking how old he was… he looked about the same age as my Dad maybe, late 70s. He asked me how old I thought he was… 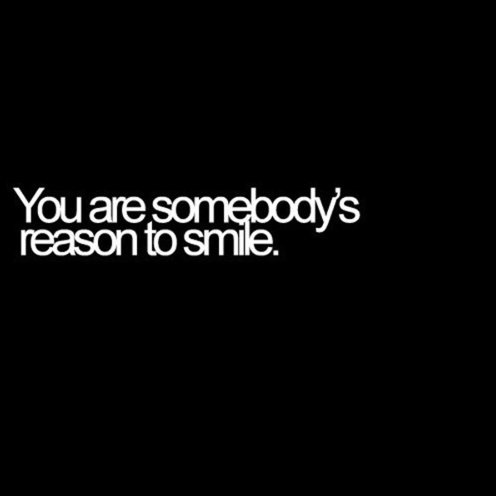 Put on the spot and wanting to be kind to him, I optimistically said late 60s… then he said I was no where near, so I said early 70s. Then I gave in and said maybe I thought he was the same age as my Dad at 78. Turns out this rather fit older gentleman Ken was 80, going on 81.

He’d been into fitness and weight training all of his life, and he attributed how fit and healthy and young looking he was, to that. It all made sense to me. We had a good chat about training and life and how important it is to fit fun into your life. And he correctly guessed I was in my late 30s. 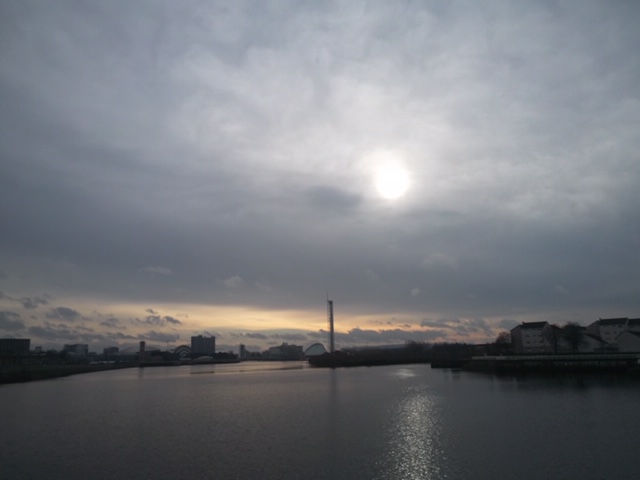 This man, who was over twice my age, being a total inspiration. He told me a bit about his younger years and asked if I was in a running club. I said no, but that I’d run quite a few marathons and more half marathons, an I now coach others to do that.

I said I didn’t think that many men his age would be out doing what he was doing – strength work in the Park. He talked about how keeping fit was key to being healthy, as was having fun in life. A man after my own heart there.

He said he’d joined the gym and should really be working out 5 times a week. I said I’d like to be gyming it 3 times a week, and running, but realistically I could probably gym it twice a week. 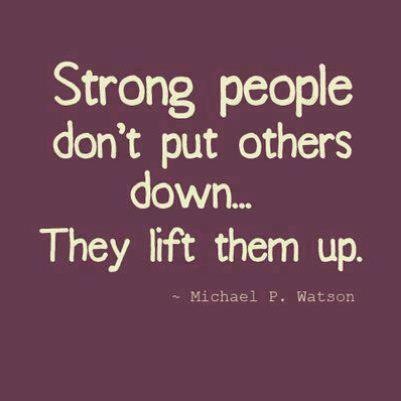 I suggested we make a pact for March, where he aims to gym it 4-5 times a week and I’ll aim to gym it 2-3 times plus 3 runs. We shook on it and I said thanks for the chat. He seemed a lot more upbeat after I chatted with him.

Hopefully me going over to him for a chat helped him see himself in perspective as a fit man. He said he said age was just a nunnery and shared his wisdom about life with me.

Hopefully me going over to chat helped him perk up a bit and hear that he was doing well, even though he seemed a bit fed up when I started speaking to him. 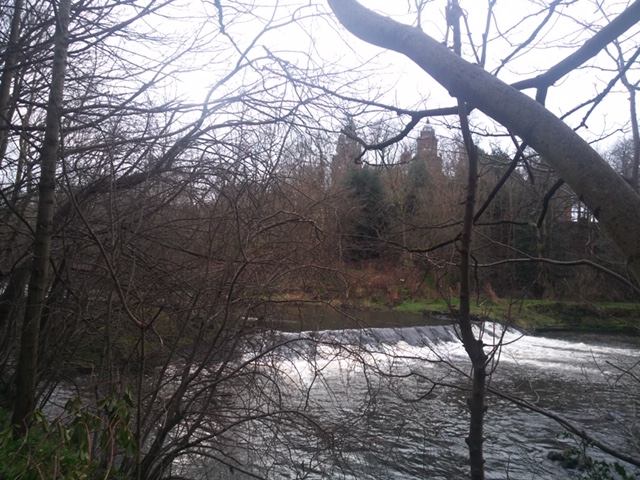 After we parted, I headed along further up the Kelvin, with my audiobook back on. Ticking off the miles, nice and steady. My average heart rate needed up being 150, max 165. Funny that as those numbers are the ones I aim for, on average and max.

I hit 1:30 near enough dead on for 10 miles, then did another mile home and finished along the Clyde near my house. I’d taken on two caffeine gels on the run and had had plenty water before and after the run.

That’ll be about 375mg of caffeine, and then I had a forgoodness shakes milkshake before a shower and going out to lunch with Fit Girl. 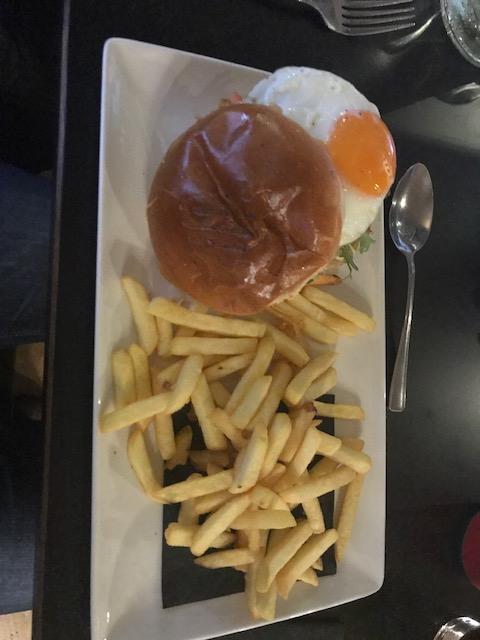 We went to Cafe Source in the east end where I had a good burger and chips. I added an egg on the top and realised when it came there were two burgers in the bun. Ooft. I still managed to eat it all.

Now it’s pouring with rain and I’m considering taking an afternoon nap to recover from the run. Rock and roll, but fun running and a good wee day full of running, eating, napping and being with my favourite person for lunch.

I hope Ken felt good after I chatted with me. Im always impressed when I meet older people who look after themselves and keep fit. It’s what I’d like to be like when I’m 80. Squatting iron, keeping fit and healthy.

Now, March, I’m going to keep up my running (with two half marathons – Inverness and Alloa) and get back into the gym 2-3 times a week. I enjoy it and I can make the time in the morning. And I’ll finish off reading the Luck Factor too. Hopefully it’ll help me see fate taking care of my future.