Posted on December 9, 2018 by lornpearson

I was up early today in the clear crisp December morning for the Santa Dash. I was meeting Kirsty and Victoria from work, and had text Kirsty to say I’d get her at the lions in George Square. 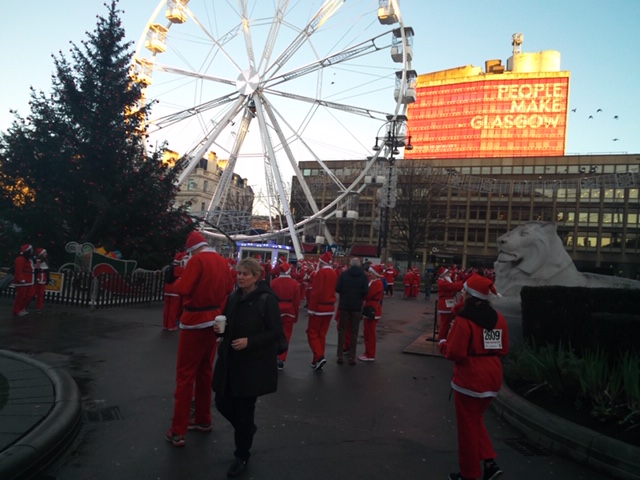 I left me phone at home, and it turns out she didn’t get the message as she’d dropped her phone last night, but randomly we met at the lions anyway. Quite lucky really, considering there were about 8,000 Santa’s in George Square. 🙂

We went to the start and patiently waited for the run to start… chatting, warming up and being three Santa’s in a big sea of thousands of Santa’s. I always think it’s quite funny. You leave your house thinking you’re the only one dressed as Santa, then all of a sudden you’re in amongst thousands of them.

Bryan Burnett was leading the chat at the start and the lord provost came on, ending her speech with – ‘People make Glasgow, and Santa’s make Christmas!’ Both statements possibly not true, but hey ho. We were off!

Around George Square a bit before going up St Vincent Street, then down it and along to Finnieston a street toward the Squinty Bridge, left along the broomilaw and back up to George Square.

Kirsty scooted off ahead at the start and Victoria and I stuck together… laughing at the sights and sounds. As we went on Santa suit after Santa suit had been discarded, like Santa’s had given up their duties in favour of running fast. For me it was a fun run, taking it easy and taking it all in.

Here’s Victoria and I running up Jamaica Street. Afterwards we went to cafe gandolfi for a wee bite to eat / coffee. Yum. I ran the 1.5 miles into town, so about 4.5 miles running for me today.

Last week I didn’t manage many miles with a heavy work week, so hopefully I’ll get back to training more next week. The Santa Dash was great fun though, and I’d recommend it to anyone for the fun and laugh. 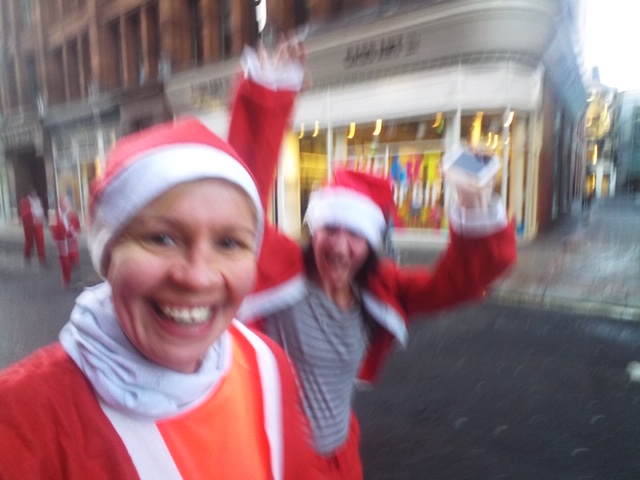