Yesterday was a good day. It was all about running and recovering after it, and spending time with people I’ve known for decades. A good wee day. 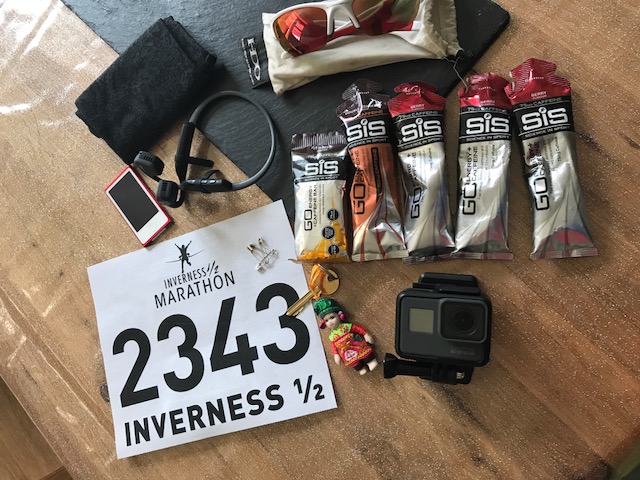 I hadn’t done a long run for a bit, 2 weeks ago it was 12 miles, a week ago I managed 8 miles on the treadmill (because of the snow), and I’ve not been running much – a couple of times a week, plus two times strength training a week.

So I knew that it would make sense to do a long run – up to around 18 miles…I was living at the top of a hill about 3 miles away from the start line, and decided I’d aim to run there which should be ok, then run (and enjoy) the half marathon. The. Run home or part of the way home (bearing in mind it’s all uphill. Ouch). 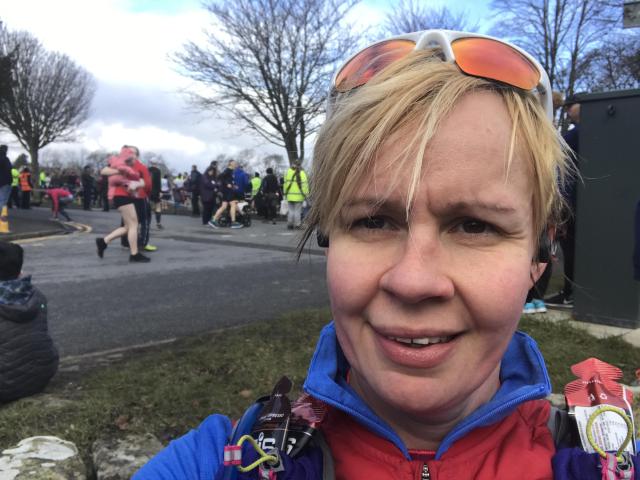 It would have been easier to drive to close to the start, do the Half Marathon and accept that I’d just done 13.1 miles, but since I’d missed or cut short my 2 last long runs, I knew it was important to do a long one his weekend.

London is 6 weeks away so it’s important to get my body (and mind) rest for the 26.2 I’m expecting my body to run. So I ran to the start, nearly taking a wrong turn, but ended up doing 3.2 miles before I started the half. 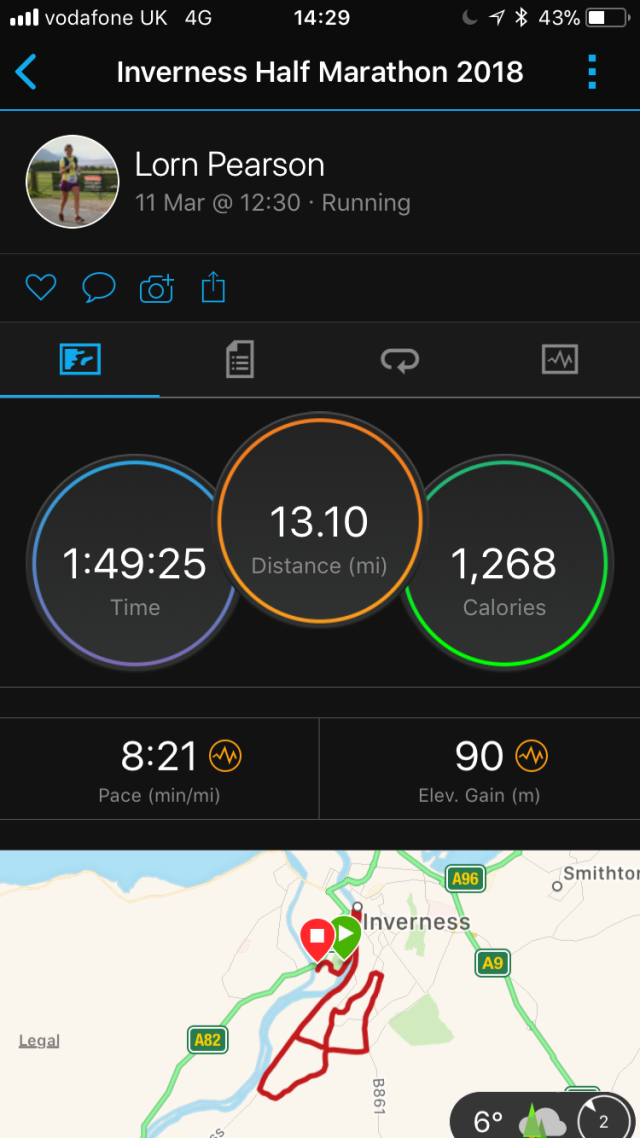 I shuffled my way to the start… I had a bit of gadget distinction – turns out my iPod and aftershokz headphones were out of charge, and I don’t think garmin live track worked. But I didn’t really mind. I was looking forward to running my first event of 2018. 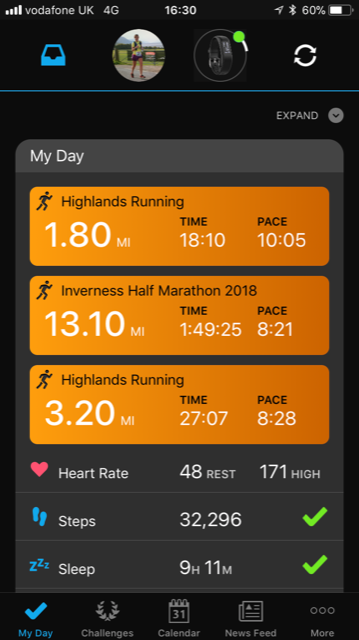 I’d had cereal and blueberries, coffee and a sis caffeine energy bar to start me off before I left the house. And I had three caffeine energy gels on the route. A double espresso one at the start (3 miles in), then another 5 miles into the half, and one about 8-9 miles in. I had my water pack too and picked up water at a couple of the stations. Fully fuelled and hydrated.

As I crossed the line at the start, I caught Bryan Burnett’s eye, and he shouted ‘go lorn’, which made me feel pretty good. 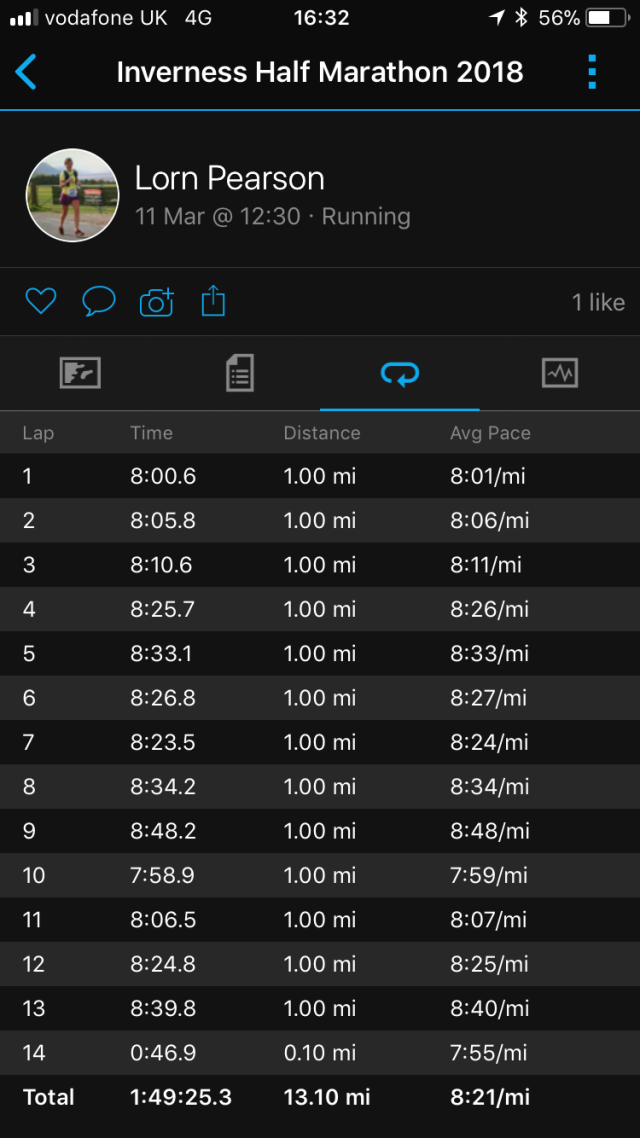 A mile or so in I was running next to a female runner, who I found out later was from jog Scotland Ellon. After a bit chatting, someone shouted my name from the sidelines (was it you?! Thank you if it was, let me know – maybe someone who follows me on here?)… then I introduced myself to the runner next to me.

Small world, Audrey who I was inning along with, knew Jen from Ellon. We ran the first 4-5 miles together at around just under 8:20 min miles, and it felt nice and comfortable. I was keeping an eye on my pace, but not my heart rate. Then there was a slight hill after we turned off the road to dores and I let Audrey go ahead of me after a good wee chat with her. 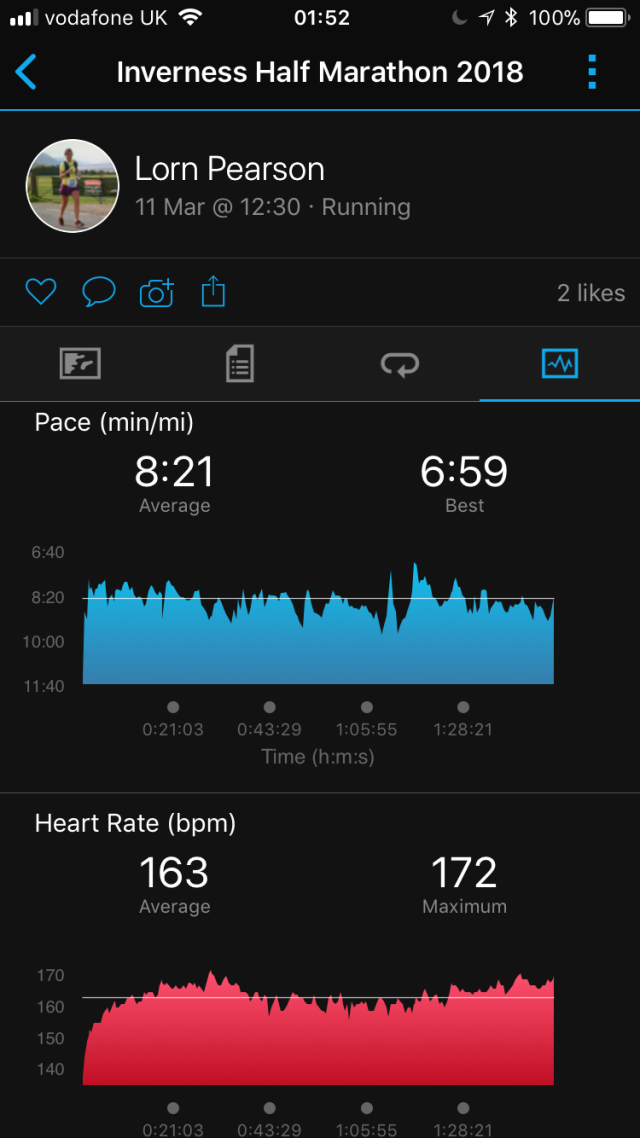 There was a friendly man there, giving us a run down of the course, that we were over the worst of the hill… and I think he was right. There was another little one at lochardil school, but apart from that it either felt pretty flat or down hill, especially mile 9. A big long run down the hill towards mile 10.

I was feeling good right up to about mile 11 (or mile 14 in my run), and for the last two-three miles I decided I’d try to push it a bit. I’d passed about 1:31 ish with about 2 miles to go and I figured if I kept my pace up I could maybe get sub 1:50, after a steady middle few miles.

Along the last stretch I passed michaela from Orkney (she had an Orkney vest on) – she was running with a guy from Orkney, maybe being paced a bit, and she said she was struggling with her asthma. I was struggling with the fact I was running the last bit of the Loch Ness marathon which brought back some tough memories, but I didn’t mention it and tried to gee her along by saying I was from wick and she didn’t want me to beat her. (Ha ha).
I introduced myself and pushed on a bit. A mile to go and it was feeling nasty…. but I knew I could keep going.

I pushed through, and had maybe leaked a little too soon on mile 12, but I knew I’d be finished soon. Along the route there were quite a few friendly people and many runners from the east and north which was nice. 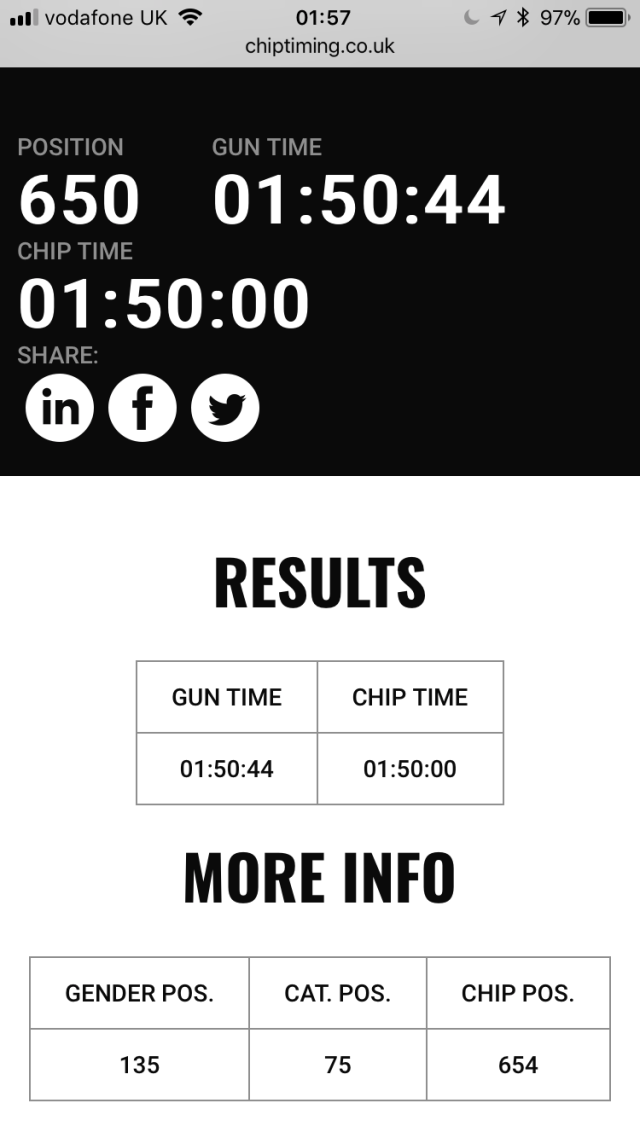 Half a mile to go, someone else said the last mile felt like a longer mile than the rest, and she was right. As I was just about to get to the running track, someone ran past me and shouted ‘come on Wick!!’ Ah!!! It was he girl from Orkney with something left – zooming past me with her pacer ahead of her.

I pushed on and crossed the line, my chip time was 1:50 exactly. I felt good but a bit gubbed – now 16.3 miles in I knew if I had a bit of recovery I could probably run back up the hill, or some of it. (I had he option of calling my friend for a lift if I wanted).

I got my tshirt and medal and came down a bit, got my photo taken and had a banana and some water, and did some stretching. Then I got myself together to start my way back home. 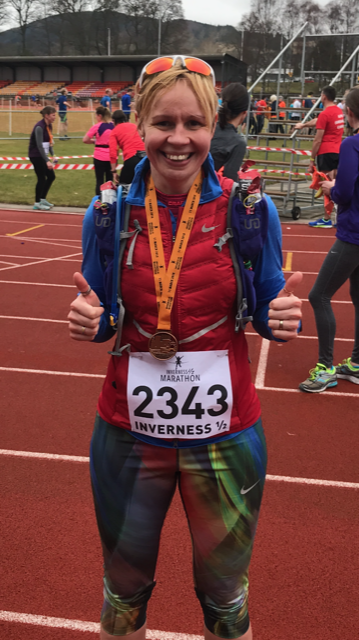 The Tshirt is bright orange and the medal is a good belter or one, featuring the Inverness Castle and an orange lanyard. 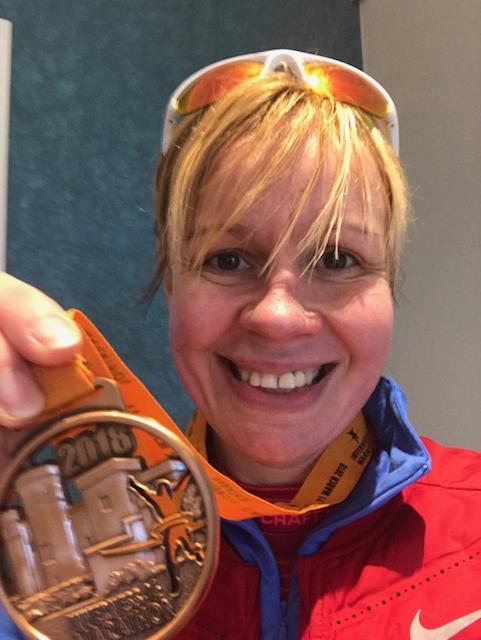 All in all it was a good event that I’d like to do again. Nice and friendly, well organised and a good route. I’d really recommend it!

Oh and I started to run home… I got 1.5 miles in, then I turned up the first hill and got to 1.8 miles and I decided that was enough. I called my friend and I’m lucky she came to pick me up.

18.1 miles in about 2.5 hours. I had a bit of a disturbed sleep but I ate plenty to hopefully refuel and get me back recovered after it all. Now I just need to drive back to Glasgow before work tomorrow.