A nice little thank you for my pacing

Posted on October 5, 2015 by lornpearson 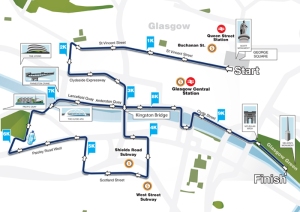 Today in work (after me pacing 2:20 on the GSR half marathon)… one of my colleagues caught me and said…

‘Lorn, I was spectating yesterday at STV (the 11 mile mark of the Great Scottish Run half marathon’… and it was kind of quiet as all of the runners were going past doing the half marathon..then all of a sudden all I could hear was you – shouting – Come On!! You can’t walk now, let’s go, let’s get running! – at the top of your voice.  You were basically shouting at people not to walk! ;-)’

(A little embarrassed), I remembered, and indeed, by that point I had got to a point where I was really encouraging (aka shouting) the runners to keep running … but what he didn’t know, was that by then, I’d been working with the runners for quite a few miles. I’d got to know many by name and I’d been ‘encouraging’ them for miles by then.

(And I have to add that I was being careful with who I was ‘shouting at to not walk’ – I was checking if people were a. injured or b. in need of a walking break or c. just walking for walking’s sake – and in need of a little push from me).

Sean the club runner, Elaine, Karen, Julie … and one guy in particular, Stephen.  In a purple t-shirt, raising money for a charity – he was doing great a lot of the way, and he impressed me with keeping going, just a bit in front of me.

Stephen looked to me to have a lot of potential and he seemed to be helped along after I spoke to him and after a few more miles when he started to walk a hundred feet in front of me and I’d tell him I could see him walking. That was enough motivation to keep him going and get him running again.  I’d shout, he’d thumbs up and he’d keep going. That continued for quite a few miles. lol

Well tonight, I received a nice message from Stephen himself, here it goes:

Someone told me your name on Sunday after the race and I just wanted to get in touch to say thanks for getting me over the last few miles in the Great Scottish Run Half Marathon. I am Stephen the struggler 🙂 remember me? I think you mentioned my name in your blog.

I managed to beat my time from last year by about eight minutes or so which was aided by your constant “cmon Stephen I can see you walking ” shout at me Ha Ha!! It did work by the way.

There was about 20 of us running for my son Sean’s school. It was organised by myself and my older son Ryan. The school (Redburn in Cumbernauld) is for complex needs kids and Sean has severe autism and epilepsy. The school is amazing and our aim was to raise about £5k to help towards purchasing a minibus for the amazing kids and staff.  We got there anyway and we have raised about £6500.

I also bumped into Frank (remember him?) who is an old work colleague and friend so you seemed to motivate both of us to get round.

So thanks again Lorn you really kept me and everyone going who bumped into you all the way round. Next year I will train for it, promise. Hopefully I will find it easier.

What a nice message, and Stephen and the many others I met en route are the reason I love to pace any pace in an event.  It’s brilliant to be able to connect with people and encourage them to push themselves and do well.  🙂 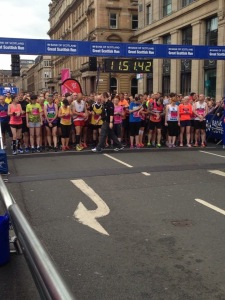 Stephen finished in just under 2:19 (and 8 minutes faster than last year) – so it looks like I did my pacing job bang on with him! 😉

I feel very fortunate to have been able to help and encourage so many people on the day and at every event I’ve paced at.

I’ve sent him a copy of my simple 7 week half marathon plan for next year / his next half marathon, to see if he might want to follow it. 🙂

Here’s my garmin route from the day, and here are the 2015 results pages.

I paced 2:20, not 1:35 (not that I could run 1:35!) or 1:45 or 2 hours.  And tonight, I shared this on my Lorn Pearson Trains Facebook page – an old blog I wrote about why I don’t think times matter… and why I’m sometimes more impressed by those at the back of the pack who run for ages (rather than just the elites / the fast ones!)

3 Responses to A nice little thank you for my pacing