Posted on September 2, 2015 by lornpearson

August was a month where I focused mainly on running (and did a few coaching sessions too). A mixture of recovery and building back up my running for me.

I did one strength session, which, whilst it was good when I was doing it, I was sore for about 4 days after it – so I decided the pain wasn’t worth it and if be better focussing solely on running (ahead of the Loch Ness Marathon on 27 September).
I did 14 runs in August – covering 134 miles (the 6 miler from Monday 31st added to the numbers above). One of my highest mileage months so far, I was careful at the start of the month to take time out to recover from the Thunder Run 24.

Just one run, a half marathon the week after the event. Last year about this time, I had started with ill health in the form of a viral infection which seemed to last until December, with some low blood pressure, a bump to the head and a big black eye to show for it. I’m not letting anything like that happen this year.
So this August has been a mixture of high mileage one week, then cutting back for less mileage / less runs the following week. I did feel a bit like I was taking the piss when I was only doing 2 runs two of the weeks, but it’s all in the plan. And I got plenty of time on my feet / walking those weeks too.

12 miles the week I helped out at the Edinburg Festival with work, and last week, when we were on holiday, we walked a leisurely 16 miles-ish, with just 1 run in the 4 days we were away. Our next long run is on Thursday, a 21 miler, and Fit Girl’s longest one.

I’m tempted to tie a heart rate monitor on her do I can understand what’s happening with her heart / body as she’s running. But we’ll see.

Here’s my strength activities / durations for the year so far, I’m going to pick them back up again September to December again.
And here’s my steps for August – the running and walking has helped me do an average of almost 16k steps a day, slightly higher than in July. Nearly 500,000 steps this month! 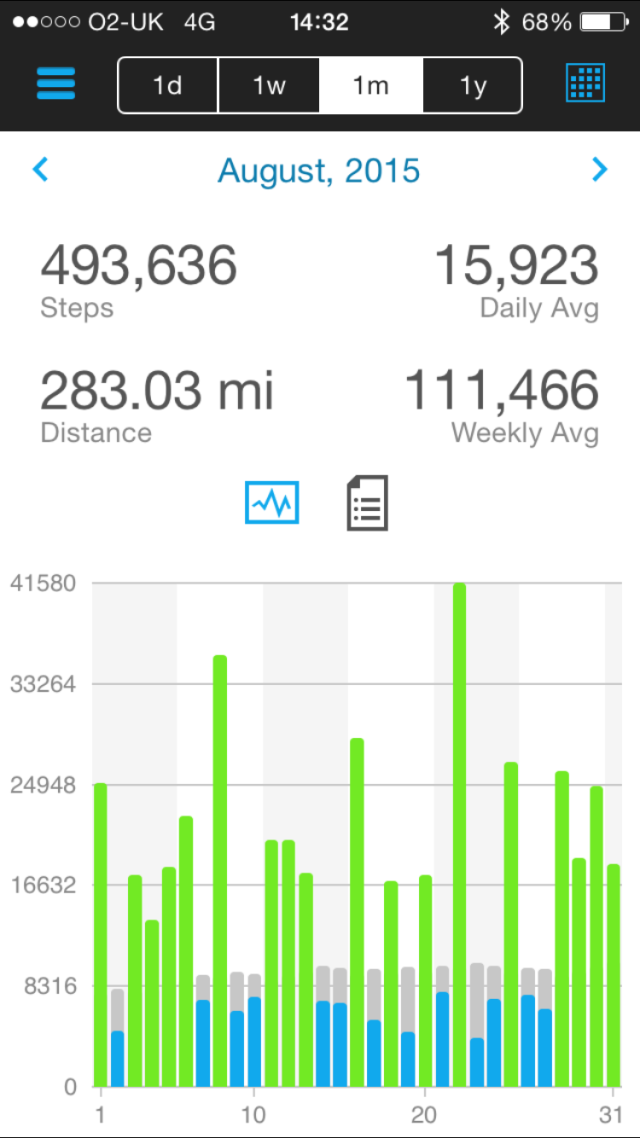 See the recovery week at the end of July …
My brother Neil in Australia is training for the Berlin Marathon which takes place on the same day as Loch Ness marathon. I’ve been using my Garmin app to keep track of his training, in particular the ‘Leaderboard’ part of the app.

It’s clever as it shows the miles run by you and your connections. But I was either astonished or embarrassed to say when I was running 25-35 mile weeks in the last few weeks, my brother Neil was peaking at 140-150 mile weeks!

We clearly have different goals – I assume his is to run the fastest marathon of his life and beat as many people as he can on the fast course that is Berlin (perhaps?), and my goal is to run the Loch Ness marathon, supporting Fit Girl to complete her first (and to have fun) and ensure I don’t overdo it. 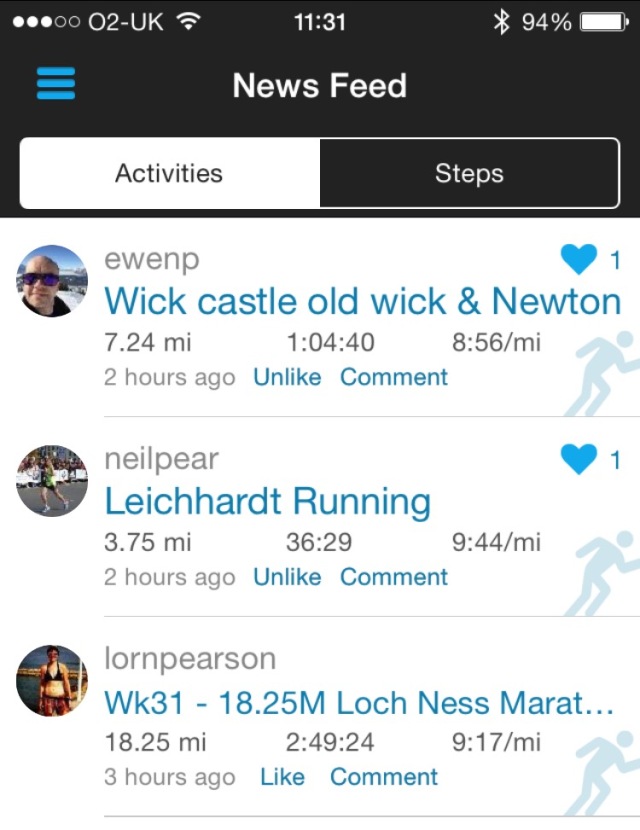 Garmin also allowed me to notice this in August. One day, my 2 brothers, Neil and Ewen, Fit Girl and I were all out running at the same time (one Saturday). Neil was in Sydney, Ewen in Wick and we were in Glasgow.

Perhaps I should arrange that we all run together / apart on a special date in the future? What would have been our granny’s 100th birthday later in September perhaps? 😉 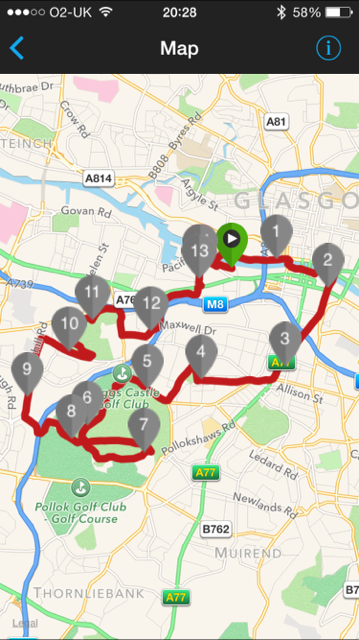 Other than recovery and running, I’ve been coaching two ladies who are doing the great Scottish run at the start of October. We ran most of the route in a couple of long run sessions in August, and they’re getting on well.

We have another couple of runs planned along the route in September, and they’ve asked me to run with them for the full distance before the event which I’ll do.

I’ve been watching my weight creep up since last year, but I’m not too bothered about it. I figured the increased mileage would probably take care of it, and in August, it went down a bit, body fat is down a bit too, although the body fat % has remained mostly the same in the last few months.

The slight reduction in weight is maybe due to higher activity levels and being a bit more careful about what I’ve been eating, but not by much.

A bit more analysis into the figures and:

There’s not really much in it and I’m sure if I wanted any change to happen (up or down significantly) I’d need to make it important and focus more on food and strength work.

At the moment, it’s all about running and keeping that going, and being healthy with it too. 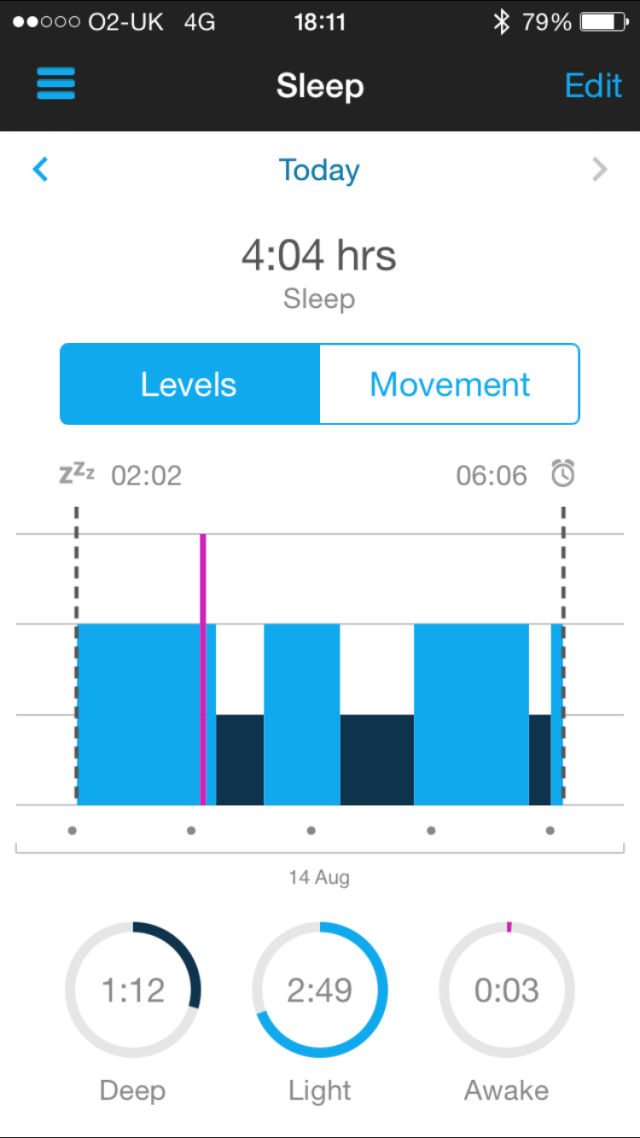 My sleep has been good in August, with only one night where I struggled to get to sleep and only had 4 hours sleep. I’m tracking my sleep and I’m getting between around 8-10 hours a night – which is great. Long may it last.

September is hopefully going to be more running, and doing 1 strength session a week. Building up running miles, then cutting back before the marathon, and helping Fit Girl do her first marathon / Loch Ness.

Last thing, I’ve enrolled into an evening class at City of Glasgow College – September to December: Introduction to Counselling. Fingers crossed it’ll help me in my job, and in general when dealing with people. 🙂