I’ve written about Fit Girl on here before: https://lornpearsontrains.co.uk/?s=Fit+girl&submit=Search

I should mention a few things before I write about her amazing result today:

1. In case you didn’t know, Fit Girl is a runner just like me, but the main difference between her and I is that I post about all of my runs, and sometimes some very personal things on Facebook and my blog for the whole world to see.

Where as Fit Girl likes to remain anonymous. She’s not on Facebook, she keeps herself to herself and that’s the way she likes it. So you won’t see pictures of her, and unless you know us, you might never know her name. I think that’s kind of cool (and I’d never be able to be so aloof!)

2. Fit Girl has had an issue with her knee for what seems like forever – maybe 4 or 5 years. A weakness in her leg, glutes or hips (we think) leads to her knee sometimes giving in through pain. We thought it was her IT band, and she’s had numerous physio, chiropractor, you name it, appointments. New shoes, insoles, complete rest. We’ve tried it all.

Now whilst my running career has progressed, 5k-10k-HMs-Marathons-Ultras, she’s been stuck at running 10k events (many with pain), or loops around the Clyde in case her knee flares up. It’s been very frustrating for her.

So here goes: today Fit Girl ran and completed her first half marathon ever – she ran all the way, nice steady pacing, and had no knee pain! Yahoo! 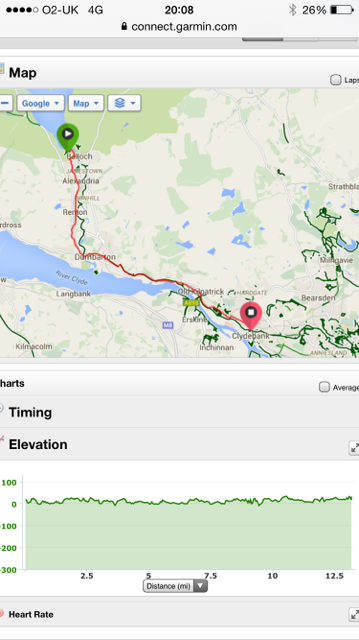 Since the start of the year Fit Girl has been building up her leg / glute strength on the spin bike – and the good news is, it seems to have worked. In 7-8 long training runs she only got a little twinge of pain. But today, for the Balloch to Clydebank half marathon, she had no knee pain and ran strongly all the way. 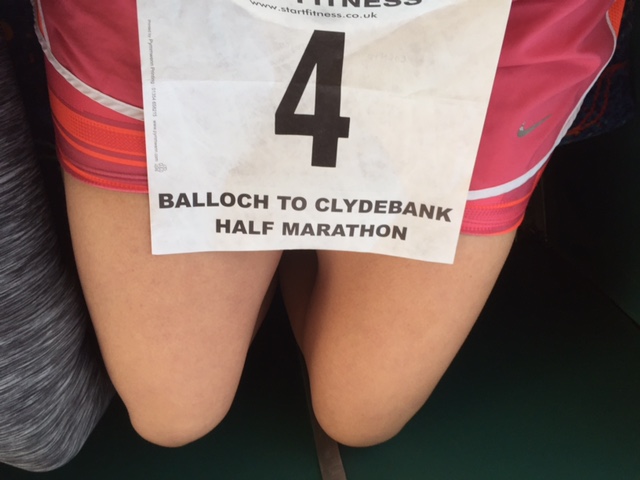 I was on hand, to get her water at miles 5 and 9 and I handed her jelly babies from about 50 minutes in. It allowed her to focus on her run and make sure she didn’t do anything to risk her knee flaring up.

The night before, we were in bed early, maybe 830pm, but unsurprisingly I couldn’t sleep. I had disturbed sleep the whole night, then at 5:15am she was up to get ready. Uuuurg. I was up half an hour later, bleary eyed and tired.

We drove to Clydebank and were at the front of the top level of the bus at around 730am, ready to wait at Lomond Shores for just after 8. The race stared at 9, so we had a few toilet stops, and a few stand under the hand dryers to warm me up.

I remembered I came to those toilets after running my first marathon distance in November 2010 – I could hardly walk, never mind sit / squat for the toilet. 😉

We met a few people we know, just before the start, Debbie Martin Consani passed and said hello, and mentioned her usual nerves. I was pretty sure she’d do a good run, and she did. My nerves were there as usual, but gladly this wasn’t going to be my race today.

I had my phone with me, and set up Garmin Live Track up. You set it up before you start your activity, take your phone with you (and have your phone synced to your Garmin by Bluetooth). Send the link to friends or on Facebook and they can follow your progress. Very clever. 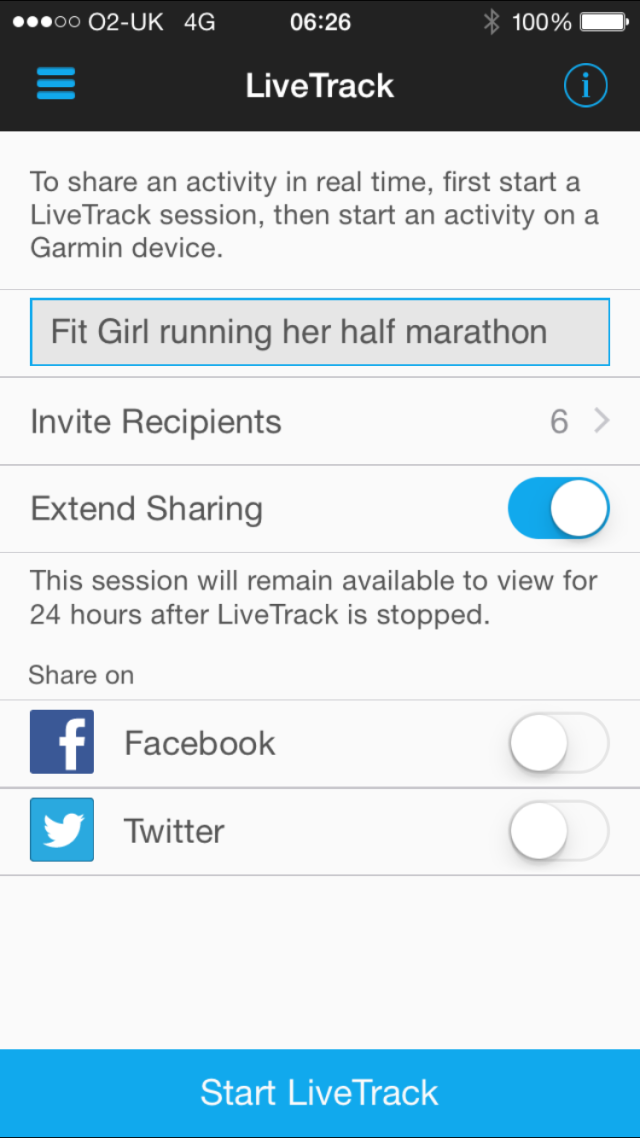 We got some nice messages from some people who had been following us. (thank you all 😀 – they were much appreciated).

And I mentioned to Fit Girl near the end that Janice would be shouting at her laptop in the last mile. I bet she was. 😉

(This made us smile too). (And Janice was cheering FG on from behind her laptop): 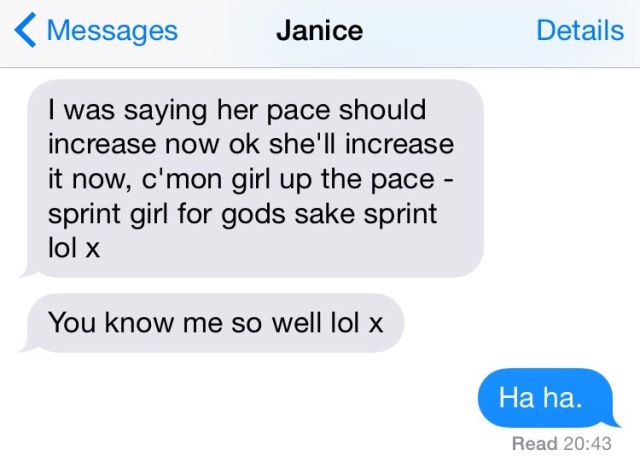 The weather was okay the start, sunny and not too cold or windy. Ideal perhaps. We started off and quite quickly I realised we were running about 30 secs per mile faster than she usually does. But she sounded and looked like she was doing fine, so I didn’t let on. 8:25s… 8:30s… I just kept my mouth shut and kept running with her.

We run a lot together, so I know that she doesn’t like me telling her about pace or distance (and she doesn’t have a Garmin). I just kept telling her how strong she was running and how good she was going. I even managed to keep the fact that she was on for a sub 1:55 until the last mile or so.

After the start, she continued a steady pace, but we had a woman stick to us like glue for the first 3-4 miles. Really heavy breathing in our ears. Everyone seemed to know her too, so she was getting lots of shouts and cheers.

Then she shouted at someone ‘I think I’m going to be sick’, so I figured she wouldn’t be with us for very much longer, and sure enough, the heavy breather disappeared behind us. Phew.

Fit Girl’s breathing was relaxed and she was running strongly. At mile 3 we nearly got sidelined by an ambulance who didn’t see us as he was trying to park. I was closest to it so banged on the side to make him stop. We might have been in his blind spot?

I remembered the route from the years i’d done it – in 2010 and 11, and I still liked the route. Nice and flat and scenic – a nice small crowd of runners too.

At mile six we met a Maryhill runner (Liz) and had a nice wee chat with her (Liz is doing the D33 next week so we chatted a bit about that and a few other things).

Fit Girl’s pace was pretty much steady up to about 7 or so miles, then after that I stopped paying attention to it. I (and she) was just hoping that her knee would be ok.

(I hadn’t been paying attention to my HR at all, and we did slow a little, but I didn’t think it became that much easier. Perhaps my HRM slipped? Who knows. Avg HR 137!)

At mile 8 we saw the lovely Paul Clawson and Cris Walsh who were on the sidelines supporting, cheering and bell ringing. I wasn’t impressed with Cris offering us the ‘CHEEKY MONKEYs’ sweets too late for us to reach for them. (I bet he ate them all himself!).

Up towards mile 9 when it started to rain a little, but it was ok. (Apparently Fit Girl wished for it). I knew I’d worn my cap for a reason. She kept taking the odd jelly baby, and before we knew it she was onto her last one, a (magic) green one (or so I told her). 😉 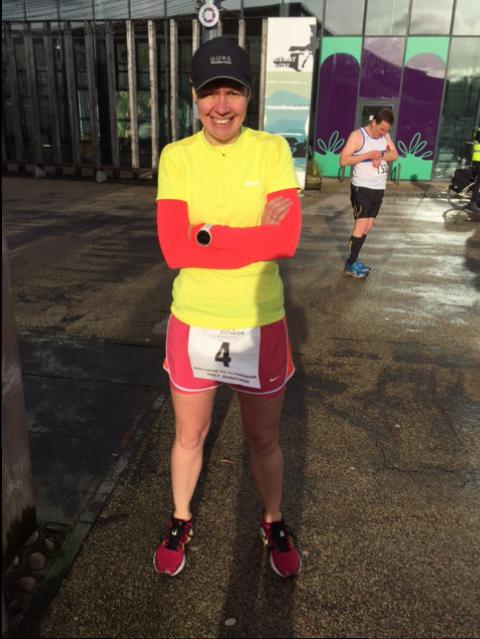 Kind of downhill into Clydebank, the marshals were plentiful, although we did run along a bit that was really empty. Fit Girl mentioned that there was no one around and I was tempted to tell her that there would be her mum, dad and 2 good friends at the end. But I refrained.

It was odd on the downhills, I know from our training runs that Fit Girl holds back on the downhills (because of her knee), but it feels so odd. I kept pace with her and held back too, but I was so get tempted to let the hill take me. I think I only let go once… (then apologised and came back).

The miles were counting down, 2 miles, 1 mile, then along the long last mile that seems to go on forever. Around the corner under the bridge, with spectators cheering us on.

I told her how far we had to go, and urged her to push it a little. She did, but was still being careful in case her knee broke (or whatever). I let her run in to the finish in front of me, and I nearly forgot to press my Garmin stop. She’d done it.

She finished in 1:52:42, and then I pointed out her mum, dad and two friends who she didn’t expect to see. We got our goody bags with Tshirt and a banana and water. She was a bit disappointed she didn’t get a medal, but maybe I’ll get her one from online so she can remember it. 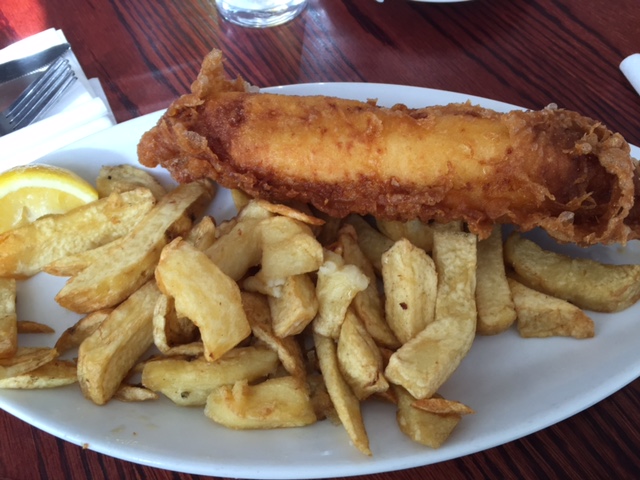 We stood about for a bit, then we got changed at the playdrome (I had a chocolate milkshake too) and we all went and got fish and chips at Mcmonagles. I had lemonsole which was good. 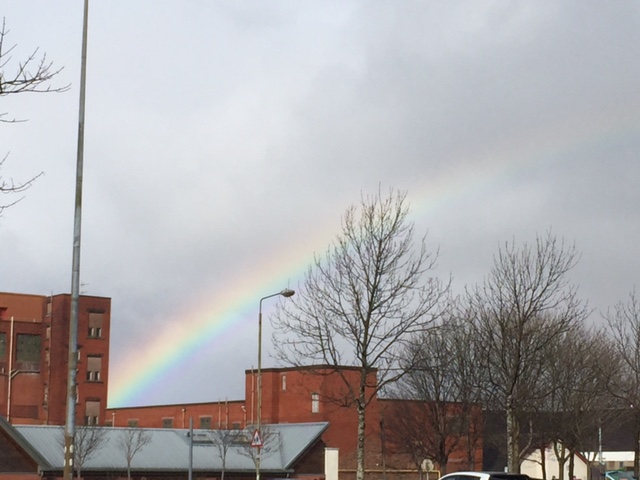 Before we got changed, I went to the car to get our bags. And guess what I saw?

You got it. This bright lovely rainbow. It hung around until we both got changed and as we walked out together it was even bigger and brighter. I was well chuffed. A great wee Sunday. 🙂 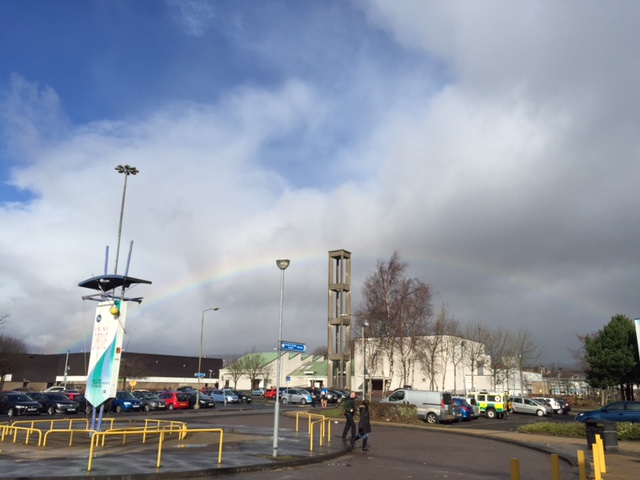 Home for a shower and a nap, then I had blueberry and walnut oancJes for dinner (luckily we’re not too sore after, I think!)

Here are the race results: http://www.stuweb.co.uk/race/10L