Here’s a guest post from my Dad! He emailed me it the other day and said I was welcome to put it on here, as long as he got the copyright. ;-).

Always into new technology, my Dad had the first macs when they came out in the 80s and 90s and always kept up with / keeps up with (and is astonished by) new technology.

He is also an atheist and believer in evolution, the main reason I am too.

Here it is then:

I found this in the garden yesterday. I admit I sprayed some water on it to show it up!

I was delighted with the results, even though I know they are not technically very good photos. But just seeing it and being able to get a record of it made me so happy.
I found it amazing and very beautiful. Even though I know it’s there to catch, kill and eat flies and smaller insects! 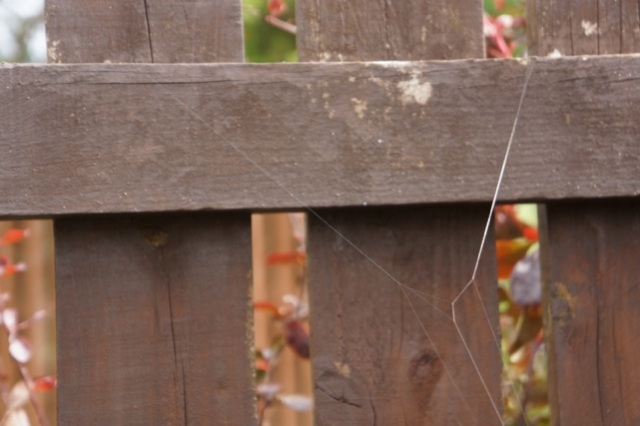 This is how it is anchored on the fence about 1 metre above the actual web.

Then I got to thinking, ‘How the hell can a small spider with a small brain do that? And how does it learn to? It’s not as though its mother can say to it “this is how you make a web to catch flies”!’

So, it must be “Evolution”!

So, after the BIG BANG, as every thing grew and cooled down, galaxies and the stars and then planets evolved.

On ‘Earth’, some elements got together and made an amino acid, then a protein then eventually simple DNA and then LIFE!

Over millions and millions of years life developed from amoebas up though insects etc to MAN which is where we are now I suppose!

During that time spiders arrived. I suppose one was born with the ability to make the strands of a web and that was an advantage and its descendants prospered and took over until the next lot learnt to weave webs and then they prospered (to the detriment of the ones who could not do that) so now we have spiders which can make these beautiful structures to feed themselves and their offspring an so they survive. In Evolutionary terms.

Now, here comes the crunch. In the last 10,000 years Man has gone from living in caves and chasing animals for food to sending a man to the moon, a spacecraft out of the solar system and the INTERNET!

Maybe Ray Kurzwell is correct in “The Singularity is Near”, we will all be connected to computers and they will rule us!

It’s amazing where a spider’s web can take you!