Today is the day I say goodbye to a very special lady, Norma.

She was my Dad’s nurse when he had a GP practice up in Wick, and she was a lovely lady. I got to know her when I was a teenager growing up and latterly as a student I’d go and visit her.

When I graduated she gave me a nice giraffe ornament with a card, in the card it said:

‘When times were tough for Edward and I, we’d always think of a giraffe and how funny they look, and we’d smile.’

Edward was her husband who she nursed through cancer. The giraffe story always stayed with me and the ornament has had pride of place in my house ever since.

After she retired, she took up painting and she was very good at it. Here’s one of hers which she gave my dad as a present.

My dad knew her very well, and he wrote this about her:

‘She was a lovely, caring person and a very good nurse. She didn’t call a “spade a spade”. She, like me, called it a “Bloody shovel”.

Hiring her as my practice nurse was one of the best professional decisions I ever made.

So many memories! She was a blunt Geordie (just like me) but had a heart of gold. She worked very hard in the practice and became indispensable.
I helped her through Edward’s illness and she helped me through a lot of my problems – both professional and personal.’ 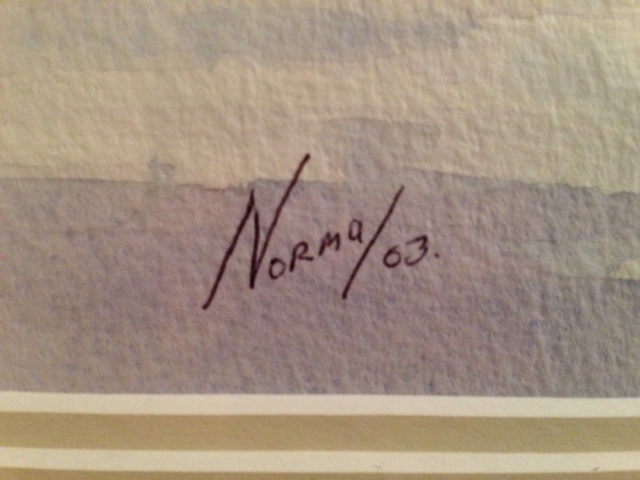 He tells me that they had the highest rate of smoking cessation in Scotland because they worked as a team to get people to stop smoking. Norma was so good at her job, a caring and very special person.

She cared for people and was able to prevent illnesses, rather than just treating them.

One phrase that always sticks with me too, was what she said about me when I was training A LOT. Looking back at the way I was training, she said,

And she was dead right. That’s one of the reasons in more careful to rest and have fun rather that train over train and train.

Today is her funeral, and I’m so pleased to have had her in my life and as an influence in my life.

Goodbye Norma. I’ll be thinking of giraffes and you today. Xx