Feedback on the Bellahouston Refurb 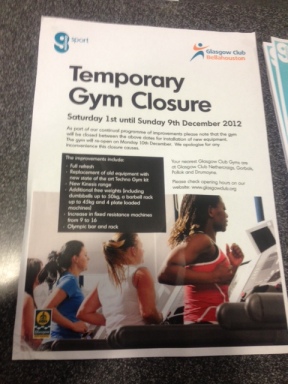 Last week, the Bellahouston gym was closed for 9 days whilst it was being done up – the reported benefits included:

I was there this morning, and yes, it has had a nice refresh.  Nice new paint on the walls, nice brand spanking new machines and weights.  The new cardio machines are great: Bikes, treadmills, cross trainers, rowers.  You can play games on the machines and the TVs will work once they get them up and running. You can compete against friends on the rowers, and there are two good Watt spin bikes which are a very welcome introduction to the gym.

I’m a regular gym user at Bella, and I gave most of my feedback to the gym staff and manager, but I thought I’d get it together here too.

With one trip to the gym today, I’ve noticed there seems to have been a reduction in the equipment I tend to use:

I’m not normally ‘negative’ but I feel these were the constructive bits of feedback I had for the gym.  And I felt as a regular user of the gym it’s important for me to get my point across.  I did give some feedback on the barbell rack which Colin sorted right away – it had some heavy barbells on one side of the rack and lighter ones on the other, meaning it was hard to lift the heavy barbells from chest height.  I suggested the lighter ones should be at the top and the heavy ones at the bottom.  Sorted thanks to Colin! 🙂 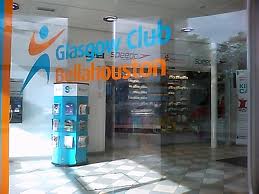 I guess when you’re used to doing a workout a certain way, and the equipment changes it might take a while to get to know how to do the workout you want to do using different equipment.  I’m sure once I use the gym more often I’ll get used to what’s available and can continue to get a good workout from it.

However, I do think I made a good point about the reduction of the amount of weights in the 12kg – 18kg range at Bella.  Sure bring in up to 50kg dumbbells to attract new meat heads… I mean customers, but don’t reduce the amount of weights you had available in the mid-range of weights! When I go to the gym (630-730am weekdays), the gym is relatively quiet, however I can imagine when it’s busy the need for more of them will become more apparent.

There’s still some equipment still to be delivered and I’d say it is definitely a good work in progress.  I probably need to spend a bit more time in the gym to get to know what’s available, but just now for me, the jury’s out.  In the meantime, I’m sure that the staff and management of the gym take on customer’s feedback and continue to improve the gym in the future.

Overall, the gym improvements are good, however to make it even better, I think it’d be great if they had more mid-range weights across the gym (12kgs – 18kgs) and a rack of kettlebells. It’s quite quiet in the gym just now, it being December,  but I can imagine when it gets to January and people are back exercising, they may come across a drought in dumbbells they would normally use in the gym.

Perhaps I should ask for an induction to see what all of the new equipment has to offer so that I can really use the gym to the best of it’s availability? 🙂

This entry was posted in My Training, Review, Weights. Bookmark the permalink.

1 Response to Feedback on the Bellahouston Refurb