Q. How do you go about training for a Marathon?

I got this question from Johanne Begg on my Lorn Pearson Trains Facebook page:

Q. I’ve recently got into the London Marathon through the ballot – for my first marathon ever! I’ve run a few 10ks and 3 half marathons in the last few years so decided it was time to step up so applied for it and got it!  I was a bit shocked to say the least but am going to do it! So…I was wondering…do you have a marathon training plan you would recommend thanks?x

I was in the same boat as you in October 2009, when I decided that I was going to do my first official marathon – the Lochaber Marathon in April 2010.  I’m the kind of person who likes to try things out before I commit to things, so in Winter of 2009, I attempted to train to complete a marathon.

I’d done quite a few half marathons by then, and was going to train for some more when I decided attempting a marathon would be a better challenge for me.  I trained for 9 weeks and decided on the 21st of November that I was ready for it.  I ran 13.1 miles north up the west side of Loch Lomond from Balloch, and back.  Here is the training plan I used for the lead up to my first Winter Marathon: Winter Marathon Training Plan
(See more of my training plans here)

I learned a lot from training for the marathon in the Winter.  About how to build up my miles, what energy and hydration to take on, and how cross training helps.  Since you have around 10 weeks left of the year, I’d suggest you try to run long (you don’t need to do the full 26.2 miles unless you want to – maybe up to 18 miles?) and see how you get on and what you learn from it.

Then you can take some rest over Christmas and start training for the London Marathon in January 2013.

As for training plans for the marathon, I’ve always based my training plans on the Runners World Smart Coach tool.   It suggests a 4 weekly plan, where you build up your mileage for your long runs for three weeks, then have an easy week with a shorter long run.

I’d suggest you run no more than 3-4 times a week and if you want to do more exercise, do cross training such as strength work, circuits or swimming.  Consider running on routes which are similar to the ones you’ll run for London (urban) and maybe check out the Elevation of the London Marathon.

Here’s the two step training plan I’d suggest for you: 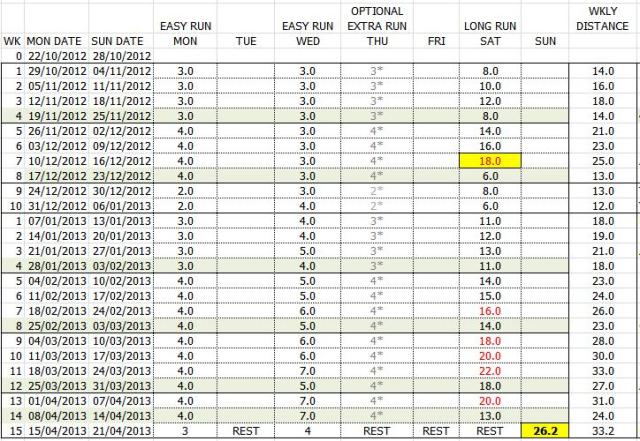 Here’s the excel file if you want to print or amend it.

And I’d also suggest you buy this book:  The Competitive Runners Handbook  to learn more.  🙂

Believe in yourself
Are you a positive or negative person?
How to run and enjoy it

3 Responses to Q. How do you go about training for a Marathon?