In around 10 days time, we are walking the West Highland Way. 96 miles from Milngavie to Fort William in 5 days of walking.

So we decided this weekend would be a good time to test out our gear (boots etc)….with a wee hill walk somewhere.

– especially with the good weather that was forecast.

We had the choice of three hill walks we wanted to do;

We wanted a walk which was close enough to home (within an hour of traveling) and one which we’d done before, but come Friday night we couldn’t decide which one to do.

So I put a poll up on my blog offering the first two as options. Ben Lomond won hands down with 6 votes to nil! So Ben Lomond it was. All I can say is thanks for choosing it as we had a great day up Ben Lomond! 😀

We like to get up and on the hills as early as possible, so on Saturday morning, we were out of the flat at 6:30am and at Rowardennan for 7:30am to start our walk.

I’d had porridge for breakfast, but after only a short time walking I was hungry again…so had half a mars bar… (before 8am! – oops). It kept me going anyway. 😉 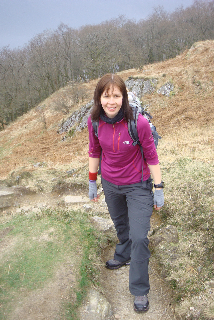 I started up layered up, trousers, tshirt, top, gloves, but soon the layers came off as I warmed up. 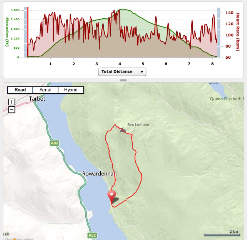 The route we took was up the Ptarmigan Ridge Route… if you ever do Ben Lomond, I’d suggest you do this route rather than up and down the same track. To start it you walk out of Rowardennan along the West Highland Way, until you get to a house before a small river and bridge. Directly after the bridge you take a right up the hill. 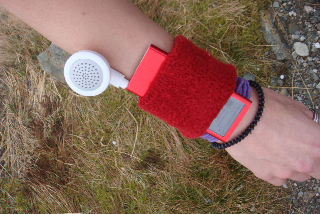 I decided it was a good time to try out a wee music option I’d thought of so that we can have subtle music with us when we do the West Highland Way. My iPod nano with a little speaker attached to it. I did have it in a pocket on the outside of my bag, but found the music was better heard if it was on my arm, so I looked a little bit silly with it strapped to my wrist, but I didn’t mind. 🙂

You can usually get great views over Loch Lomond when you go this way, and avoid many of the other walkers who tend to go up the more frequented ‘tourist route’.

Unfortunately it was a bit foggy / cloudy when we went up… however it did clear after around 300m and remained that way until we got back down. It was still a great walk.

After around 1000ft the path levels out along a ridge and you can get some great views. We were just above the cloud inversion, so we didn’t see much of Loch Lomond, but could see for miles above the clouds. 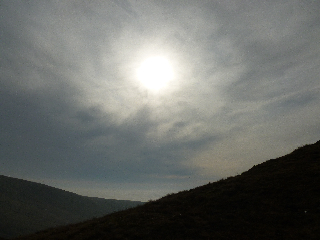 And the sky was making some pretty impressive patterns too. ;-D

I was really enjoying it, although I could feel it on my calves! Luckily my boots were good and didn’t give me any blisters. We’ve started rubbing Surgical Spirit on our feet to see if we can harden them up for the walk. We’d heard it helps prevent blisters, so we’ll try that once a day until the walk on the 3rd April. 😉

After 2 hours the haze was well cleared and it was becoming a really nice day. We were about 2000ft up though and it was a bit chilly, so layer after layer went on. (but it was still ok for shorts).

Then I had a bagel with peanut butter. (Yes – the cats joined us… 😉 :
for Asda & Jasper’s Adventures, their trip up Ben Lomond, go here) 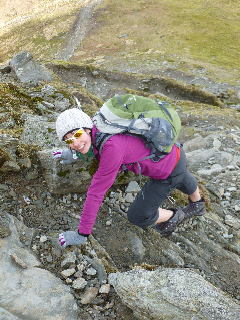 The last 600-800ft on the route is a bit of a steep climb in the shade, but we’d remembered it from last time so we were well up for it.

Nearly there…but don’t look down… it’s a hell of a drop down there! 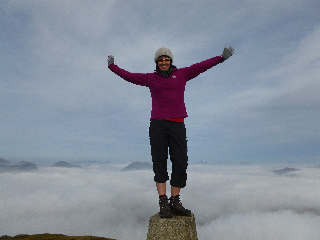 High up above the clouds 🙂 It was a little chilly, so we only stayed there for about 5 minutes.

Here’s the video(s) from the top:

On the way back down…….Herrrrrrrrrrrrow!! 😉

The Cobbler in the distance… maybe next time.

After around 3 hours, we stopped for a banana, then I decided it would be a good time to start running a little. 🙂 I love it.

The last time we did Ben Lomond we ran all the way back down in around 1:30, but as Fit Girl is still injured (IT Band), this time I just hung back sometimes then ran bits of it on the way down. It was brilliant. 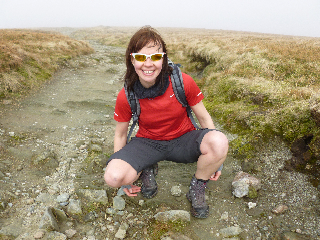 We took this rather odd picture of me… I was facing the camera to start, then turned to show the cats in the bag…and if you look from my head down…it’s a really weird image (i think)…. like my feet are on the wrong way! lol

And we met this rather enthusiastic chap and his owner….

I bet he took that stick all the way to the top!

I had to wonder how he would avoid all of the walkers as he tried to speed down the hill… but never mind. And I thought I was crazy! 😉

Another wee bit of running for me… 🙂 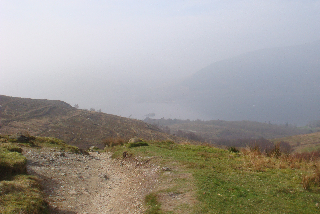 The view down to Loch Lomond…

The view back to Ben Lomond…. 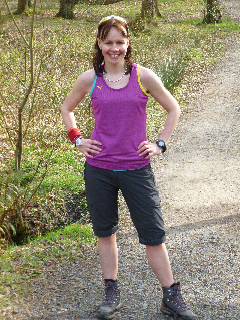 What a great Spring day for a nice walk up Ben Lomond!

After the walk, we wrapped up warm and had a wee picnic to celebrate.

Then home for a nap to recover. It’s the next day now, and I’ve got no pain what so ever, which is good. 🙂

Today I just feel a bit dehydrated for some reason… :-S

Hopefully the 5 day walk on the West Highland Way will be painless too! 🙂

PS: There’s more pictures in a slideshow here (some of the ones above will be repeated).