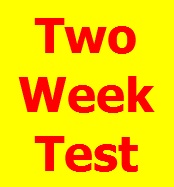 Two weeks ago I changed what I ate and started my Two Week Food Test.

I did this in order to:

The Two Week Food Test is meant to:

(Dr Phil Maffetone is the author of The Big Book of Endurance Training and Racing and his Two Week Food Test is in there.)

How did the Two Week Test go for me?

The first morning sitting down to two scrambled eggs and tomatoes was not a welcome breakfast.  I’m so used to eating porridge (and toast sometimes too) that eggs just didn’t seem to do it for me.  Especially after an early morning run.

But over the fortnight I became used to it. I tried adding honey (whoops this was on the foods not to have list!) to the scrambled eggs to make them sweeter, and even had smoked haddock one morning.  As the days went on I was becoming more and more open to trying new things in place of my staple, and probably very carb rich, diet.

I seemed to be hungry more, and ate more often, not wanting to become famished at any point.  Snack here, snack there and another snack here… then I also took protein shakes to make sure I was full and hopefully able to recover properly after training.  Lots of cheese, meat, salad, eggs.  😀

The trick was to:

I was up against it anyway, as you aren’t meant to train when you do the test.  Or if you want to train, you are allowed to eat Fruit.  I didn’t want to reduce my training volume (1-2 times a day 5-6 days a week)… so I decided I would compromise by allowing myself to have fruit and milk/protein shakes.

Then later I decided I would add honey to my scrambled eggs to make them taste nicer.  So I cheated in a way, but I didn’t give in to eat the really bad things like mars bars, microwave meals and rice.

One Friday night eating out, I had a bit of bread, and one day I made soup with potatoes in it… but on the whole I refrained from having rice, sweets, pasta, corn, crisps, chocolate, pancakes, cakes, chips and bread and all other banned foods on the other days.

How did I feel?

I felt fine on the test.  My Dr brother suggested I might get ‘constipated’ but I didn’t (thankfully).  Possibly due to me still eating fruit and eating plenty of veg too (?)  When training, sometimes I felt a little light headed, but always tried to make sure I was well hydrated and exercised after having something to eat to keep me going.

I felt tired at the start of week 2, but I think that was more to do with lack of sleep on Sunday night as opposed to the food I was eating.

At the end of the two weeks, when I ran for 3 hours on the Saturday, my body really needed carbs to help it recover after it.  I’ve learned that whilst cutting carbs may be good if you want to lose weight, it is definately not a clever idea to do it whilst training heavily.  You need to fuel your body to enable it to perform and recover.

I burned around 5,000 calories a week, see detail and weight etc results below, the steady weight and body fat for the Sunday to Thursday was really strange…but it’s what the scales said! :

What impact has it had on my body?

Well, the goal of this test was not specifically to lose weight, however I did lose a little.  I had a lower limit weight I would allow myself to go to if I was going to start losing lots of weight (120lbs).  If I went below that weight, I would stop the test.

The change in diet towards a more protein rich / less carb rich diet (along with my training) seemed to help shift a few Christmas lbs.  (I started the week at 128lbs, 22.4% body fat, but I’ve measured my loss based on my average weight for the prior 4 weeks).

I’m pretty much at my ideal weight: anywhere between 120 – 130lbs, so there wasn’t much room for movement here.

Anyway, for the 4 weeks before the food test my average:

It just shows you how changing what you eat (not so much how much you eat) can impact your weight, body fat and water!

Someone with more weight to lose, and a different diet to what I started with, might be able to lose more weight and body fat with this Two Week Food Test.  But I’d definitely recommend it (reducing or eliminating carbs) to kick start weight loss. (I’m no expert mind! – all I know is it seemed to work for me, and could work for others).

Just don’t stay on the Two Week Food Test for more than two weeks… a balanced diet is just what it sounds like… it contains Carbs, Protein and Fats.  A healthy lifestyle includes a good varied diet and exercise, and plenty of it (but once again, I’m not expert – I just know what works for me!)

(Might I add that on Saturday, after my long run I had a rather large (5000 cals, 120g carbs) meat feast pizza, along with porridge for breakfast and whatever other food I wanted…. resulting in my weight going back up to 124lbs!) :-O

What next for me?

Now I will reintroduce carbs into my diet, and will aim to eat:

I believe that I still need carbs to help fuel my training, but I hope to choose the good carbs, along with protein and fat rich foods to do this.

As a result of the Two Week Food Test I’m keen to change what I used to eat, examples below:

My nutrition will consist of:

Breakfast: Will be more varied (from just porridge):

Lunch: Won’t just be a ‘something’ filled wrap or a sandwich, I’ll continue with my jam packed salad full of:

Snacks: Will be of better quality, instead of bagels and nutella / mars bars:

I will NOT give in to chocolate mars bar cravings (like the ones I used to get at 5pm, or before lunchtime), and will have better snacks (or water/milk or a main meal) instead.

Dinners: I’ll not to buy convenience meals, and do more home cooking:

Chinese meals / takeaways: Will be more considered; I might eat peas / veg instead of rice.

Puddings: Will not be sweet chocolatey or cakey things, they’ll be:

Drinking: I’ll drink water and milk and won’t have fizzy juice (I do this anyway).
I’ll have sports drinks when I run long, or train hard for a long period.
I gave up alcohol nearly 1,000 days ago, so I’ll keep off that still (20lbs lighter since!)

Eating out: When I eat out, I’ll really consider what I’m having and not go overboard with the courses.  I’ll stop eating when I’m full! (fingers crossed)  I’ll go for good tasty food where I can.

Food and exercising: When I’m on the run or recovering from a long run, I’ll eat carbs, and eat what I want to help recovery, but not in excess:

Fast food: In moderation, and not often, I’ll have what I fancy (and be bad!), ie: Chippy, Chinese, MacDonalds, Burger King.    But I might just miss this one out and have eggs or something really good instead!

How does all that sound??