It’s come to that time of year again… where I add up all my totals of how far I’ve run, cycled, swum and walked etc… and this year has been a bit of a bumper year for me. 🙂 (In comparison to 2010 anyway).

With my increase in running / training for marathons and the prospect of ultra marathon training, I’ve increased my annual running mileage to around about 1,250 miles this year!   Running, on average, for about 3.5 hours a week. (Up from 2 hours a week in 2010).  PS: I’ll have done 1.250 by the end of the year. 😀

I’ve walked more this year too (probably to do with the West Highland Way walk training in the later stages of the year)… a total of 276 miles, 40 more than last year (and I’m sure I’ve walked to and from work less!)

I’ve done 54 hours of circuits / kettlebell workouts / weights in the gym and been to basketball just 3 times!

Then there’s my weight…

It started at 130lbs at the start of the year (body fat 22.7%), and reduced to around 124lbs around the time of the Lochaber Marathon in April (through more running and more running).  🙂 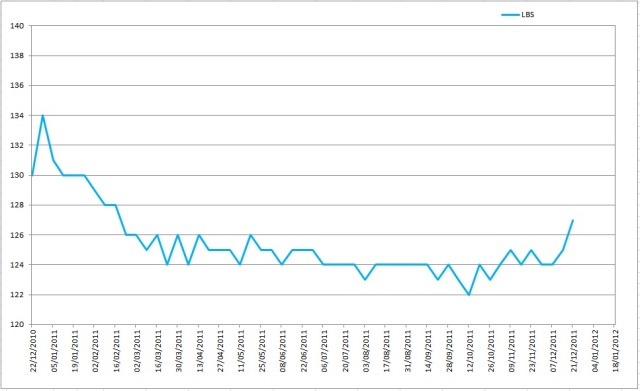 I maintained that weight for most of the rest of the year, simply through running and training lots.  In October (after our Summer Holidays) my weight was the lowest it’s been, at 122lbs (+2lbs away from my ‘Racing Weight) and my body fat was 19.8%.

However I’ve found in the last few weeks (with less running and more weight training) that my weight (and body fat %) has increased slightly… that’ll be ‘off season gain’, which I’m more than comfortable with.  😀  In the last month or so, I haven’t really eating more or less, but I’ve been running less, so burning less calories overall probably.

It’s quite interesting to see how doing (and not doing) different activities affects it.

And it is Christmas afterall – the fridge is full of good stuff which needs to be eaten by me! 😉  The training plan for early 2012 will take care of any weight I gain anyway, so I’m not bothered about it. 😀

In 2012, I’ll possibly run and walk more and perhaps cycle less (no Spin until Helen comes back 😦 ), but who knows what the coming year will bring.

Hopefully with cross training involved in my training I’ll avoid injury, and keep up the momentum to achieve my challenge of completing an Ultra run (or two or three perhaps?!?)