Posted on November 1, 2011 by lornpearson

I saw this story and thought I’d mention it on here.   It all seems a bit unfair… 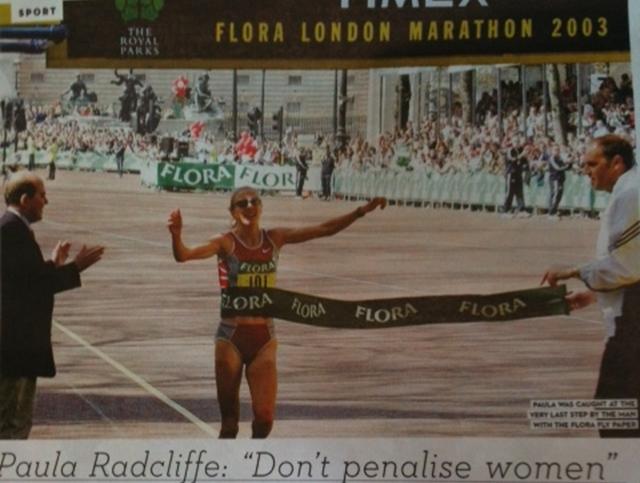 It’s not just in the boardroom that women need to put up a fight.  As the International Association of Athletics Federations announce they will only recognise women’s world records from female only races, it seems sport isn’t immune to sexism either.

Their new ruling means that Paula radcliffe’s 2003 London Marathon record has been downgraded simply because she was running alongside men.  Not surprisingly, she’s unimpressed.

‘This penalises women in sport.’ Paula says, ‘The IAAFs reasoning for the change is that, in mixed races, the men act as pacers making us run faster.’

‘So now, any women’s performances acheived in mixed fields will be referred to as a ‘world best’, not a record.  But when I ran 2 hrs 15 mins 25 seconds in 2003, I was racing the men, not getting help from them!  This now limits the chances women have to set records.  I abided by the rules.  How can you now say they don’t count?’

This entry was posted in Challenge and tagged 2003, marathon, paula, radcliffe, record, running. Bookmark the permalink.