That’s us back from Chicago – let me tell you Chicago is brilliant city!! Lots to do and see – we were kept very busy! Thankfully I’ve got over the jet lag and seem to be back to UK time ok. And Asda and Jasper seemed to like it and are settling back in now after their big adventure too. 😉 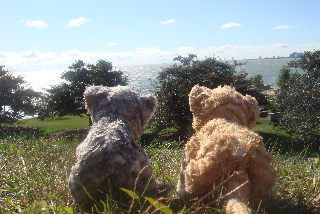 The weather was a little odd but on the whole it was nice but changeable from day to day – sunny and hot one day, a little rainy and colder the next… but what they thought was a horrible day could easily have passed for a nice summer/spring day here. But it was mostly nice – 17-30’C. And the windy city was indeed a little windy on the occasional day. 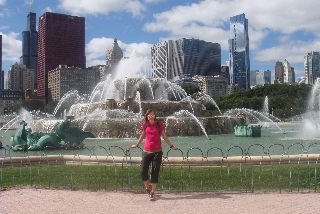 We did lots – went to lots of museums, shopping and went up the Sears tower and the John Hancock observatory – I thought once we’d been up one building it would be the same, but they were both very different and good experiences. There are some really amazing buildings in the home of the sky scraper that is Chicago. 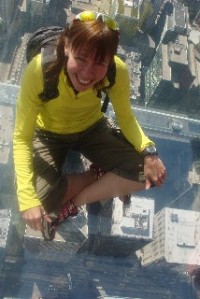 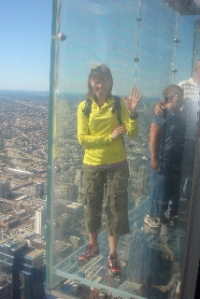 Top of the Sears Tower, Chicago 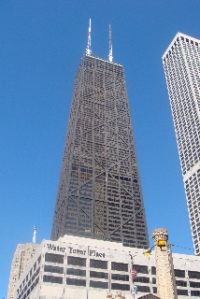 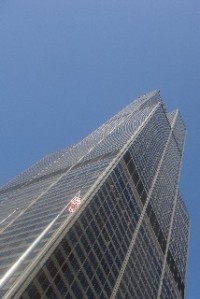 The Field Museum, Planetarium, Acquarium (best one I’ve been to) and Museum of Transport and Industry were all very good museums – all offering very different things. I’ve been to lots of museums and aquariums and I have to say the ones in Chicago were the best. Interactive, informative, reasonable.

We walked lots, ate lots and hired bikes for 3 days too. We got a city pass which made it really cheap to see the main museums and attractions of the city. And we even managed a wee train trip to Aurora through all the nice wee villages (for shopping some discount shopping).

But this blog isn’t meant to be about my holidays – it’s meant to be about training and events so let me tell you about the Chicago Half Marathon event I did on Sunday the 11th of September! I felt so fortunate to be given the opportunity to take part in the event (especially free of charge!)

You can see the results here… i was number 1926. And here is my garmin link – the route was nice and flat and the only really challenging thing (for me) was the rising temperatures and heat – but I managed to survive ok.

I have to say – the Americans really know how to do a running event!! We cycled there at 5:45am….got there for 6:30 and I ran my half marathon at 7am. Then we were all done by 9am and could have got a free beer and pizza (we passed as we had to cycle back). Back to the hotel by 11am and back out for lunchtime! 😀 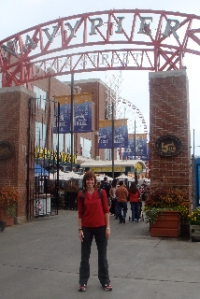 Navy Pier for the Race Expo 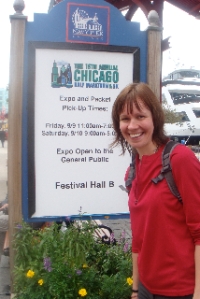 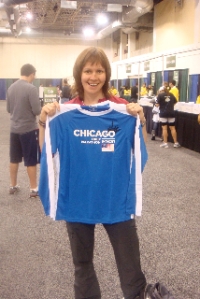 In our race pack we got our number, pins and a really good long sleeved technical t-shirt…. I’ll be wearing that a lot I think!! (Fit girl was doing the 5k which started at 7:45am).

They also had a stand which sold race ‘apparel’ and i managed to purchase a really good black Craft hoodie top which was Chicago Half Marathon branded. 🙂

On the day itself we cycled the 8.2 miles from downtown to Jackson Park along the Lake Shore front… I was a little worried it would be dark – but the sun was rising nicely and it was a pretty cycle. We got there, locked the bikes up…and I got my Scotland flag cape on. I’d made a sign for it before I left which said ‘Hi, I’ve come all the way from Glasgow, Scotland’ and the Americans loved it!

As I was passing people, all I could hear was… ‘Awesome’, ‘Nice’, ‘Go Scotland’ – and inevitably, one guy came up and ran next to me asking which part of Glasgow I was from – I told him and he said ‘My Grandma came from Pollokshields’…. lol (about a mile from where I live now). 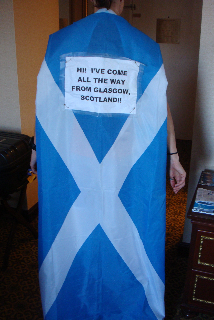 I joined the crowds not really sure which area I should be in, but I managed to settle get there about ten minutes before start time. I didn’t have a water pack with me and decided I’d rely on the many water stops instead. After a few minutes, I shifted forwards a bit to see if I could start a little further towards the start. I was at the edge of the group so I could move forward if need be. I don’t like crowds much. 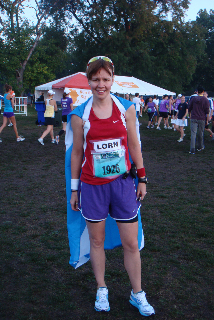 We started and I crossed the start line about 6 minutes past 7. A run around the neighbourhood for a few miles, then out onto Lake Shore Drive which is the main freeway which runs up the lake front on the East side of Chicago.  Dead flat… elevation gain just 44ft! 🙂

The race is so early for two reasons: a. any later and it would be sweltering hot. b. so that traffic isn’t affected too badly on the main road to Chicago. 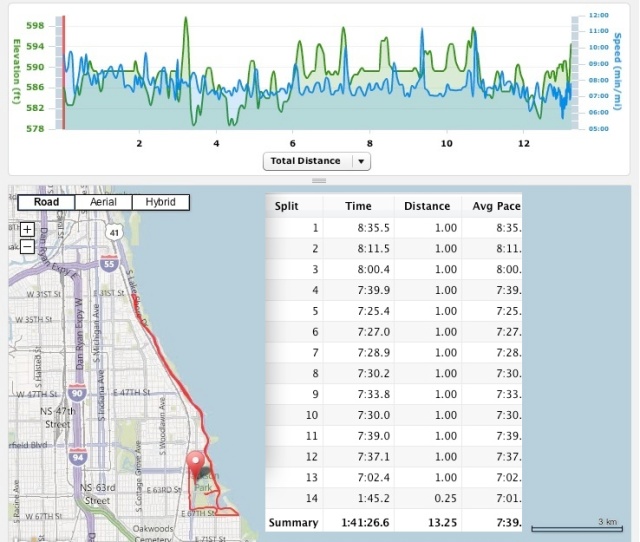 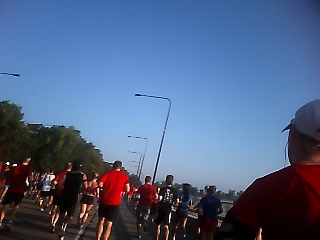 The weather was good – clear, but warmer than I was used to. I knew what I was in for though and decided I’d maybe take it easy. The first 3 miles in the crowds I was passing quite a few people and getting into a rhythm, then once we were on Lake Shore Drive I decided I’d just run how I felt.

As we’d rushed to get there in the morning, I hadn’t managed to pee before the run (plus the ‘port a pottie’ queues were long and I didn’t want to miss the start)… so at 4 miles in I decided I’d stop for a pee. As I stood up after doing the business… I noticed that my little camera wasn’t on my shorts anymore…. I hadn’t noticed it drop (usually I hear it clatter – then cringe)….. but it was no where to be seen on the ground (and it hadn’t fallen down the toilet had it???!)….. anyway… there was nothing I could do…so I got back to the run after a quick two minutes out. 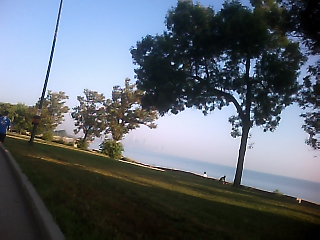 Then a few minutes later into the run, I noticed something in my shorts (my purple nike tempo shorts with the lycra undershort)…. the camera had fallen into my shorts….phew!! I stopped quickly to retrieve it and carried on. lol 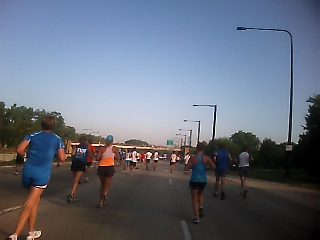 After that it was pretty much plain sailing and enjoying the atmosphere… I was comfortable, the route was nice and flat and despite the ungodly hour there were lots of crowds out all along the route. I had my name on the front of my t-shirt and got lots of encouragement and cheers. ‘Go Lorn’, ‘Go Scotland’, ‘Great cape’, ‘Go runners’, ‘You’ve got this one’. 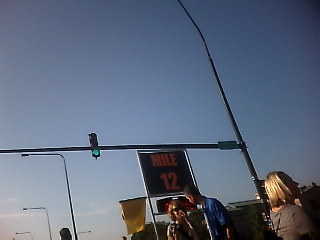 Up to about 11 or 12 miles in I kept a steady pace and was smiling all the way. I picked up water at most stops and even learned to squeeze the cups in the middle at the top to drink it more easily on the run (after seeing someone else do it). My legs felt good, but I could feel the start of calf tightness. I dropped pace slightly in miles 11 and 12, then once I got to the final mile I decided I’d try and push it and was helped along by the crowds. 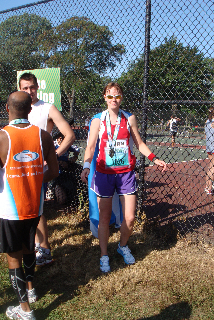 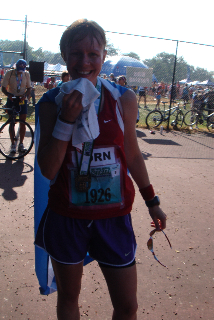 I finished the last mile and a bit with a 7 minute mile and crossed the finish line happy. Here are some thumbnails from the marathon photos website. 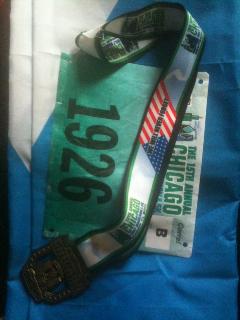 After the run, I got my medal walked around the race site a little to take it all in…. we passed on the offer of free beer and pizza (mainly because it was 9am, but also because it seemed a little wrong….. plus the queues were massive) and got on our bikes to cycle back to the hotel.

On the way home, we passed many runners / walkers who had been moved onto the cycle path as the road was now open. Right at the tail end two older black ladies stopped us as one of them was taking a funny turn. We stopped to help them, I gave her water and a banana.

After 3:45 hours (and about 11 miles in) in the heat, perhaps without enough hydration she was well out of it. We sheltered her and did our best to help her before her grand daughter turned up to help her. We passed a support vehicle which we told about her, and I’m hoping picked her up! 😀 Phew! 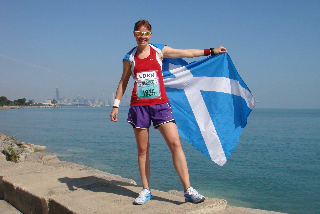 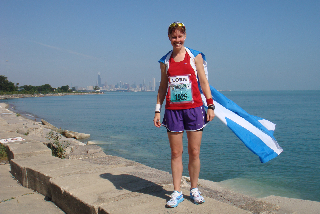 Let’s see what stats I can get out of this now… I was the:

It truly was a great event and I’m so glad I was given the opportunity to take part. 🙂

PS: You can see more holiday snaps here on my facebook.

PPS: And here’s a bad video I took along the way…

And PPPS: I bought myself a Garmin 610 when I was away….ooops! I just couldn’t resist it wtih all those dollars burning a hole in my pocket! 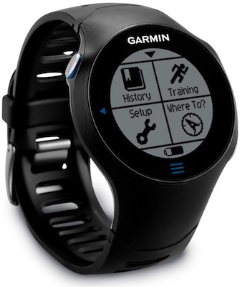 This entry was posted in Analysis, Run, Special Event. Bookmark the permalink.