I did some of the Great Scottish Run 10k and half marathon route on Thursday night, the plan was 6 miles at an easyish pace, then pick it up the next 6 and try and go a little faster in the last 6 miles.

The joys of running in Glasgow at night:

I started off in my new Saucony Paramount 3s, and decided when I passed my flat at between 6-7 miles, I’d change my trainers to my new Kinvaras – try them out.  They might help me run faster in the last two thirds of the run.  Running such long distances in new trainers is NOT a clever idea by the way… I could have easily got an injury or put my body under stresses it didn’t need, but I took the risk.  :-S

It was my first time running some of the 10k route  (see the comment for links to the route of the 10k) and I found Maxwell Drive a bit of a hill before coming down towards Eglinton Toll, one to watch for (after the slight incline at St Andrews Drive).

I ran down Eglington Toll and into town, up Union Street.  I nearly ran past St Vincent Street, but managed to hang a left and climbed up the hill.  My second time doing this hill in training this year, and it didn’t seem as bad as last time.

About 3-4 miles in I started to need the toilet again. Arg.  Tummy cramps a little.  Running at night does not agree with me!!

I thought about visiting the toilet in MacDonalds at Finnieston, but realised I was close to home, so it’d be better to go there.

Next to the Clyde, I passed a guy KO’d lying on the ground totally out of it.

Drink or drugs?  I thought I should help him or call an ambulance, but I didn’t have a phone, so the option I chose was to run past and ignore him. tut tut.  I ran across the Squiggley Bridge, then down to West Street and Seaward Street.

I stopped at my flat so that I could do the toilet stop and change my trainers.

My cramps were a little eased.  My first mile in my Kinvaras was faster than the previous miles, but that was mainly because I was pushing it.

My first 6 miles were at 8:07 min mile pace, the nest 6 were at 7:27 pace, 30 seconds faster and the last 5 (before the final cool down mile) was 7:22.  It wasn’t because of the trainers, I was pushing it, but the trainers were good. Nice and light and comfortable.  Great for running fast (speedwork and races).  Nice to know I can still finish strongly over 11 miles after running 6 miles before hand.  😀

The clouds above were threatening rain all night, but lucky for me any rain there was didn’t get to me.

Through Pollok Park and I stopped briefly to take a photo of a wee tiny highland cow calf… he was so cute.

I ran as the sun set over Glasgow and about 14 miles in I saw a lovely rainbow, then a double rainbow.  Nice.  On route I took a gel at 6.5 miles and another at about 15 miles in.

In Glasgow Green, it was a little dark (nearly 9pm by then) and Mr Fox ran in front of me.

The 18 miles was a thought, but I think I did well to stick by my strategy, keep slowish for the first 6 and keep going for the next 11 – 12 miles.  Great preparation for the 10k then half marathon in two weeks time.

No ill effects from last night apart from a little tenderness in the outside of my lower legs (new trainers I’m guessing).  Although I did have a bit of an upset tummy through the night.  Come to think of it, I think I had that last Thursday night too!

I’ll be (sort of)  glad when the nights get darker and I’m training in the morning instead of in the evening!!  All good.  🙂

I seem to be able to get faster and hopefully should be able to pull off a good run 2 weeks from now.

Here’s a comparision of 4 of my long training runs for the Great Scottish Run, last night was perhaps my strongest effort. 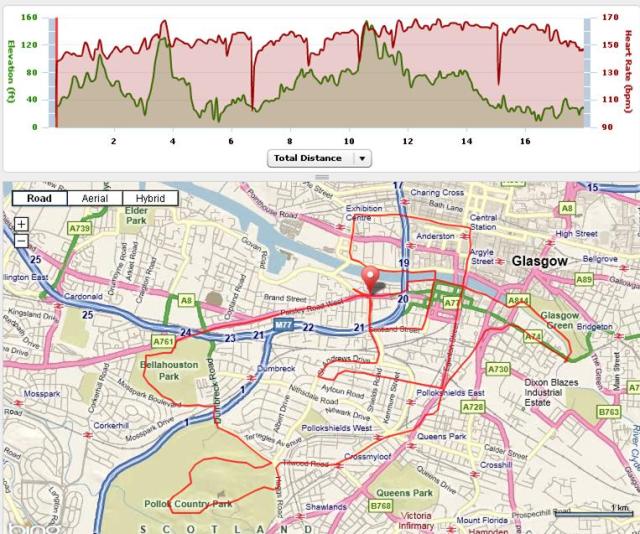 This entry was posted in Routes, Run. Bookmark the permalink.