Thursday night and I went home for Chicken Katsu… a lovely home made dish of breaded chicken with rice and chinese curry sauce on top. Yummy!

I made sure I visited the loo, before going out for my run at 18:15. When I walked home at 17:00 it was a beautiful night, the sun was shining and I was considering whether I should wear my sunglasses on my run or not. There were some rather grey clouds above, but I tried not to think about them too much.

Then when I was having my dinner, the heavens opened… I had to reconsider what I was going to wear and left the sunglasses at home, opting for my new windproof and shower proof Scott jacket I got the other day. It did the job ok, kept the wind off me, and the rain for most of the run. I also wore a buff for my ears that I took off after 2 miles.

I ran the 2 miles to Bellahouston, then met Paul. Paul is a good guy who runs effortlessly at any speed. He is rather fast, but is comfortable running at my pace and below. I met him at Bella and we continued on our route. I had planned to do about 7.6 miles following the Great Scottish Run route, but I turned right instead of left at the Gorbals so it added an extra 2 miles on sort of by mistake. I felt good running at a comfortable pace, and my knee was fine so I thought I’d be good to continue. I was also enjoying the chat and knew Paul could run on forever! 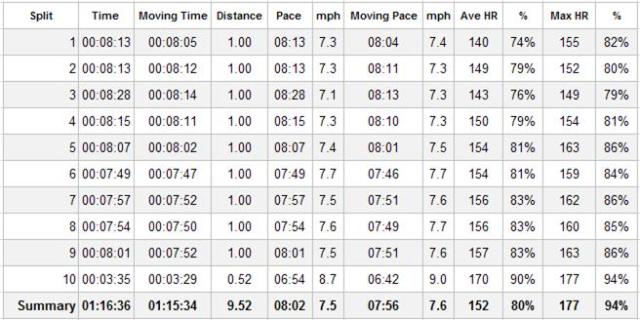 We got to Shields Road underground and I decided it was time for me (us) to pick up the pace. I thought we had about half a mile to go to get to my flat so I told Paul I’d pick it up a bit. He followed suit and we finished with a strong 6:42 minute mile (for half a mile – 8.7mph, where our average speed had been 7.6mph). Looking at the pace, we managed a good negative split – and I didn’t look at my Garmin once! (because of the rain I had it covered).

I felt good about the run. It was nice to run with Paul, and chat. I think company is what make runs really good and really worth while. There is a time and a place for solitary runs (I think shorter and sometimes faster runs), but sometimes it’s nice to chat and run at the same time – especially on longer runs.

I really think the 3 weeks off has done me great: rest, time out from running and the pressures of a training plan, cross training and focussing on something else for a while. I’m definitely going to keep up the spinning / indoor cycling as an alternative to running. And the circuits and Insanity make a nice wee change too. 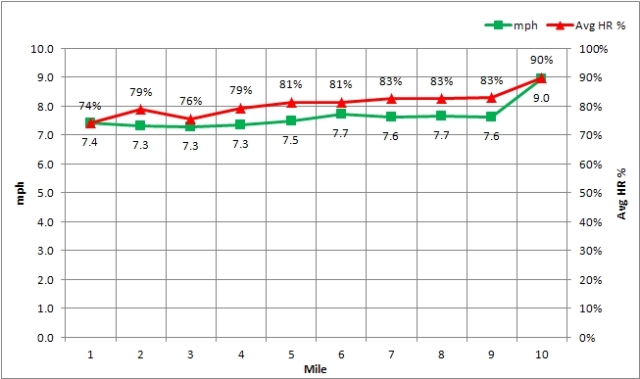 When I’m running now, I’ve noticed that my heart rate is away down compared to this time last year. Last year I ran the Great Scottish Half Marathon at a similar pace to what I ran today, and my heart rate was 91% on average.

Today it was 80%! Sure it was over a shorter distance, but I’ve really noticed a difference. It may be to do with me weighing less than this time last year (-12lbs), but anyway, I’m feeling good and hope it continues!! Maybe I’ll be able to push more to get even faster?!? 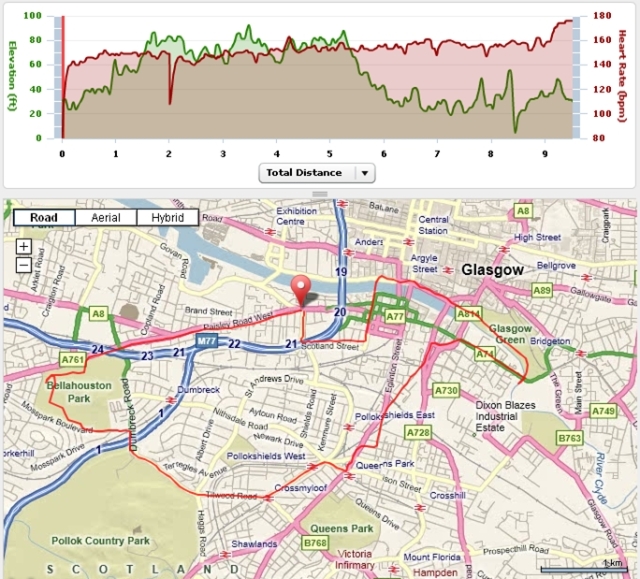 After the run, I went to Tollcross to play basketball. I might not do it every week, but it seemed to fit in tonight. I did feel myself more tired than normal, and perhaps I need to take on energy before I play if I do a long run before hand. A nice bit of caffeine or carbs might do. 😉

There were 13 of us tonight, very busy. So much so we played 5 v 5 and subs were off and on. I was glad of the rest. We ended up winning 15-13 I think… but no thanks to my shocking misses and passing. I don’t think I even scored a basket come to think of it!! Shocking. Maybe one??! I can’t remember. 😉

1 Response to Wk28 – 9.5M Half Marathon training then Basketball