The Extra Mile – by Pam Reed 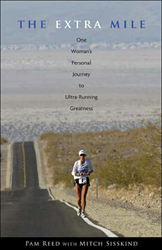 I don’t tend to have the time or inclination to read many books, unless they’re books about training or how to manuals which you can dip in and out of… but as I was going on holiday for a week, I decided I’d buy a few books (on running) for me to read and digest.

The first book I read was ‘The Extra Mile: One Woman’s Personal Journey to Ultrarunning Greatness‘ by Pam Reed.

It’s ‘The story of the woman who shocked the running world in 2002 when she won the sport’s most grueling race the Badwater Ultramarthon —135 miles from Death Valley to Mount Whitney—beating her closest competitor by 5 hours!’

The book gave a really good insight into where she came from… being a young anorixic trying to be like the Olympic Gymnasts she saw on TV… to becoming an extremely successful ultra marathon athlete, wife and mother of 3.  She is the organiser of the Tuscon Marathon which takes place in December of each year.  She talks of her acheivements and races and aims to inspire other women to take up ultra running.

In a strange way, her anorexia perhap carved her body into the machine it is today, able to deal with running extreme distances with little intake of energy or water.  (not that she recommends this, just that’s how it seems to have happened.)

Having read the book, it compounded the thoughts I have that I too could run any distance.  I’ve done 26.2, a marathon… and will do more than that in my training.  I’m planning the Clyde Stride 40 mile Ultra marathon in July and I truly beleive I can do anything I put my mind to.  (fingers crossed no injuries etc).

A few things struck from Pam’s book a chord with me:

Different Thresholds
I once talked to a woman who believed she could never be a good runner. She said ‘I’ve tried it, but the whole time I was running, all I could think was “when will I get to stop?”. And I thought “I feel that way lots of times but I just keep going. “
Maybe it’s the same as marriage, or at least some marriages. You just want to hang in there and finish the race. As someone who made the decision to end a marriage, I think it’s really a matter of taking responsibility of owning the commitment you choose to make, rather than anything you have to do.
It’s a very individual thing, what us comfortable or tolerable for people. Believe it or not it’s that way with running too. You may have to drop out of a race because of pain or injury, but another person could have a more painful injury and keep going.

This made me think that I managed to do the Lochaber Marathon, whilst other people DNF.  Sure you get pain when you run long, but you deal with it. (As long as it’s not serious) You deal with it and get on with it, and you feel a great sense of acheivement once you’ve done it.

Born to run
In a study at the University of Wisconsin, two groups of mice spent several hours a day running on treadmills. The mice in one group had been bred over six generations for running ability and motivation. In the other group were just regular mice. After each running session, the researchers measured the brain activity of the mice, which showed that they were all mentally stimulated by the exercise.
Next, the mice bred for running were denied access to the treadmill while the others had their daily workout. When the mice’s brain activity was measured again, the researchers expected to find evidence of stimulation in the mice who had done the running, and what they found.  The scientists also expected that the “racing mice”, who had not been allowed to run, would be more subdued than usual.
However, it turned out that the running mice were overstimulated by the inactivity! Not running made the uncomfortable, or even frantic, because running was what they had been born and bred to do. Running actually calmed them. I don’t really want to compare myself to rodents, but I empathise with those racing mice.

Yep, I know how those mice feel!!!

Addicted to running?
Sometimes running is described as an addiction …  Addiction is defined in a variety of ways and can be both physical and emotional.  There are also various “symptoms” that are considered to be indicators of addiction.  For a start, guilt is supposed to be a basic element.  Even though guilt is usually considered an unpleasant feeling, among addicts, guilt is an essential part of the “rush”. If the guilt is taken away, the addiction loses some of its power.
Well, it is true that there are times when I feel guilty about taking as much time as I do to run.  I’m aware that running has sometimes taken me away from my family, and I’m concerned about that.  But there’s definitely no excitement for me in those feelings.  It’s not the kind of guilt that has a “rush” to it, as there might be if running were some forbidden pleasure.  There’s certainly nothing secret about my running.
Another basic psychological theory is that addiction is defined by the severity of withdrawal symptoms someone experiences when the object of the addiction is taken away.  When people are addicted to drugs, for example, the pain they feel when the drug administration is stopped is a measure of their addiction’s strength.
Does that mean that a mother who grieves over the loss of her children is addicted to them?  That a violinist devastated by an inability to play is an addict?  I don’t think it’s helpful to attach a single label, especially a very negative one, to a range of human activities.  I’m sure it’s possible for someone who runs as much as I do could do so as an expression of a mental or emotional problem.  That diagnosis needs to be made one person at a time.  As for me, I may have problems, but running isn’t one of them.  On the contrary, I think running is my solution.
On a purely biological level, there may be some validity to the idea of running as an addiction.  Any intense physical exercise causes the production of chemicals – endorphins – that limit pain and can be very energising.  Endorphins can give you a real buzz: the so called runner’s high. It’s true that distance runners get used to endorphins.  If I don’t run, I feel tired.  So you could say that I’m addicted to endorphins.  Looking at it in a positive way, if I’m really tired, a run refreshes me.
When I’m running I can think more clearly, I can relax; I feel less stressed out or anxious.  Is it an addiction to want to be focused and relaxed?
As time goes on, the runner’s high can become harder and harder to obtain.  I do still get it, but not in the same way as I used to.  Sometimes hitting that groove takes way too long and I can be tempted to quit for the day before it hits.
A final criteria of addiction is one trait that seems to separate truly addictive personalities from those with less serious compulsions: When asked, “If pushing a magic button could forever eliminate your desire for your addictive substance or activity, would you push that button?”, deeply addicted people always answer yes.  Obviously, if you could get rid of something that was ruining your life, you would choose to do that.
If I were asked that same question about running, I would definitely answer no.  I love this. I would not want to have a life in which I wasn’t able to run or did not have a desire to run.

I’m pretty much addicted to endorphins, and would rather not give them up… thank you very much. 🙂

It was a good read anyway, nice and inspiring, but I won’t be entering the Badwater Ultramarathon just yet!

1 Response to The Extra Mile – by Pam Reed