Thursday was a day off from work and the sun was splitting the skies.  I went out for my run just after 9am.  I was going to do about 10.5 miles, and the route would include the route of the women’s 10k in it where I’d try to work my hardest to get a good time for it.

I used the first 1.4 miles to get to the start of the route as a warm up run.  It was sunny and warm and I was thinking it might be good if I tried to run in the shade when I could.

I got to the start of the route after about 11 minutes, and ran up Nithsdale Road and left onto Maxwell Drive.  By the time I was running along Terregles Avenue I was glad of the shade and ran in it whenever I could.  Not like me, but I knew I had to run for up to an hour and a half without water so I’d need to take the opportunity where I could.
I felt strong in the first 3-4 miles and used the time to see if my playlist I’d made up was any good to run (fast) to.

It was all ok apart from the new Foo Fighters song, the beat wasn’t really quite right so I’m either going to put a Script song in (my favourite group to run to) or the Ting Tings.  I’ll decide on the replacement song soon. 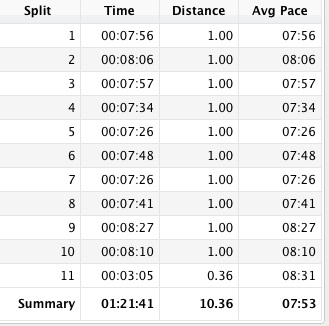 I felt fine running into Pollock Park, then I got a bit of a stitch in my upper abs… ouch… I felt my pace slow and thought I was going dreadfully slow… up the hill and The Pretender (Foo Fighters) came on…and I tried to pick up the pace.  I was trying to tell myself ‘This is easy’… and tried to push it a little. 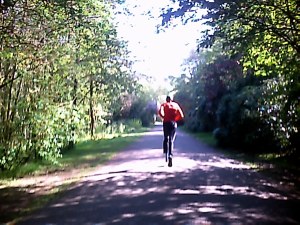 Then a tall black man in a red top and half mast trousers (presumably because he was so tall) ran past me and stuck his thumb up at me.  I don’t know if he knew I was struggling but it gave me the motivation to plough on and try to keep up with his pace.

I didn’t manage to keep up with him, but I did pick up my own pace and felt much better mentally. There was still a little pain, but nothing I couldn’t run through.  The fifth mile was surprisingly faster than I thought it would be considering: 7:48. 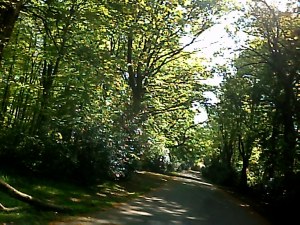 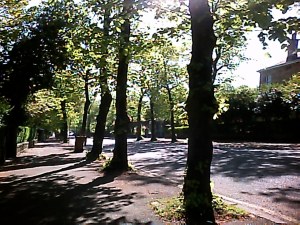 I ended up doing the 10k route in 47:16, pace 7:37.  Not as fast as I’d hoped, but good enough considering the pain I experienced in Pollock Park. I think I need to get used to trying to run a bit faster and the speed I need to run at to get my goal of 45 minutes over the 10k in a few weekends time.

I must admit this running fast is a lot harder than just running steady and chatting with mates…. I’m not sure its the way forward. lol

Anyway, for the next three miles I ran a comfortable 8:10-8:31 minute miles home.  Recovery after the hard work in the first 7 miles.