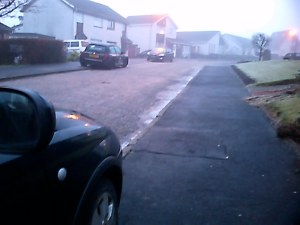 Week 3 of my marathon training.  I’d arranged to go out to where Julie Ann stays in Houston to run from there.  Apparently it’s more hilly out there, which would do me no harm at this stage in the training.  It was -1’C outside and very foggy.  The ground was frosty and in parts quite slippy but we decided it would be ok to run.

I the morning before I left I had porridge, then on my way there I took in a caffeine gel.  I had another 2 caffeine gels with me, some lucozade for after along with a protein bar and some cashew nuts.  I also took my North Face water bag with me, which I take on any run longer than about an hour and a half. It’s a bit of a security thing, to always know I have water, but I’ve also learned from sore heads before after long runs, it’s a sensible thing too.

I was wearing my nike tights, warm nike long sleeved top under a t shirt and then my puma wind proof jacket on top.  I had a buff over my ears and a buff around my neck just incase my face got cold.  I don’t usually wear gloves but because I had pockets in my puma jacket I took them along and I was glad of it later. 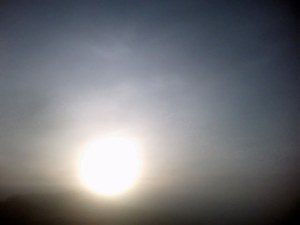 We started just after 8:30 and ran from Julie Ann’s in Houston up a B road in the middle of Renfrewshire.  It took us up over hills (From 79ft – 542ft) and into a valley at Kilmacolm.  The downhill into Kilmacolm was nice. But to be honest, because of the fog – we couldn’t really see much ahead.  And because I didn’t know the area, I was just running really and enjoying it.  It was good.

On the B road we dodged a couple of tractors, saw a few cows, and slid down some hills, but in the main part it was just nice running and concentrating on where you put your feet incase there was ice.

Then from Kilmacolm we ran along the National Cycle Network 75.  I nice
flat piece of well laid pavement away from traffic.  It goes right from Kilmacolm into Glasgow…which might be an option one day on our bikes!

Anyway, the weather made the whole place look lovely.   Again we couldn’t see too fat ahead and anything in the distance had disappeared.  But we got some good chat in and got to know each other a bit better.

Julie Ann says that everyone hates the hills around hers, but I guess I could handle them and it was nice to have a change.

We got to about 11 miles in and Julie Ann asked if we wanted to turn left and it would do us 13 miles, or go straight on for a little longer.  I let her decide and instead of turning left we kept on

going.  Then after about 15 minutes she wasn’t sure where she was and we had to turn back.  We had go to Brookfield and came up on the road, but she didn’t know where to go so we went back the way we came.

At points on the run it was so cold I put gloves on and lifted my buff over my mouth for some heat on my face.  I had thought of wearing two pairs of trousers, but in the end my legs were fine.

We ended up doing 16.4 miles.  I didn’t really mind as I knew I could do it and we were taking it easy.  There was a bit of a hill up to Crosslee and home to Julie Ann’s but it was fine.  I was glad I’d taken an extra caffeine gel before I left and when I got back to the car, I drank the lucozade, and ate the protein bar and cashews.  I’d been hungry at about 14 miles in, and the bar and the nuts hit the spot just fine.

Although it was longer and slower than I’d planned (due to the ice)… it was a good challenging run in a new place.  There was good variations with the hills and the flat.  I enjoyed it and no doubt will go out there again.

We did stop half way to take a gel and I might suggest later on that Julie Ann tries to take the gel whilst running.  We’ll see.

As for after effects.  I had quite a bug lunch of soup and a baked potato and did some usual Saturday shopping.  Then by about 5pm my legs were tired and we decided to go for a wee nap. 😀 My legs were still tired on Saturday night, but Sunday morning they feel fine.  I’m pleased I managed 16 miles without much hassle. 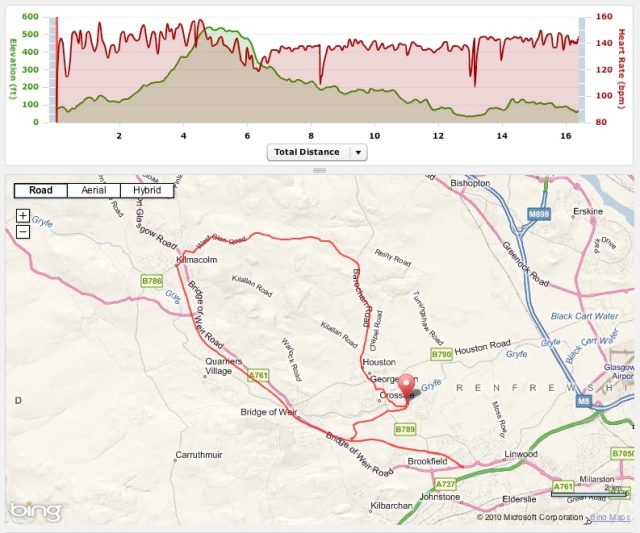