Saturday was meant to be cloudy until 10am then ‘light showers – was it f**k.  It was light showers from 8 – 10 then it brightened up a bit.

I left mine at 8am and ran to my friend Jackie’s house… it’s about 2 miles away – through Govan – but I decided I would run a 3 mile route to get there as a warm up before our 12 mile route to Paisley and back.  I started well, running the first mile in under 8 minutes… and the next two around 8:30.  Nice and comfortable.  It was spitting lightly when I left.  And I was thinking I could have worn a jacket… but nevermind. 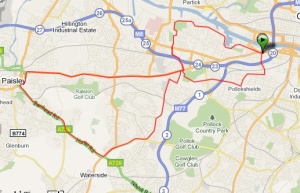 I wore along sleeve helly hansen top, a t-shirt and my nike shorts along with my buff and my ever trusted water pack.  I was aiming to do 18 miles, so I would need the water!

We left Jackie’s and ran to Bella, then down Corkerhill Road  and up to Barrhead Road (A726) to Paisley.  I was surprised at one point just after an hour in to look down at my watch and see 8 miles on my garmin.  We’d been so comfortable and chatting, that I didn’t even feel like I’d run 2 miles, never mind 8!  Brilliant I thought.

When we got to Paisley the clouds turned greyer and the sky more overcast… and the rain started getting heavier.  About 10 miles in and my knees were feeling a bit sore with the cold, but as long as I kept them moving they were fine.  Time for 3/4 length trousers me thinks.

We stopped when we got to Paisley so Jackie could put her jacket on, and we took the opportunity to take on a caffeine gel too.  Running along Paisley Road West Jackie went a little quiet, I think she struggled a little after starting back up again, but she said she felt ok.

We got back to the street Jackie’s house is on and we even managed a wee sprint to the end.  At Jackie’s I downed a bottle of lucozade lite and continued on my way back home. I ran back to Bella, through the Park, up Nithsdale Road and back to the flat… 18.5 miles all together.  Ending up being half a mile longer than I planned.
Oh and for some reason the nike plus thingy paused at 10 miles in … grrr… not sure why but I think Jackie’s did too.  Very odd. So it only recorded 14 miles for me.

I felt strong and comfortable through out and probably could have run for longer.  Good good.  😀  Fingers crossed I stay this positive about long runs in the future! Running with someone else really does help the time go by! (and helps me to pace myself)…

And for the second week in a row after a long run, I didn’t need a nap! Yey!  Refuelled when I came back, had a hot shower and later went out for a Calzone Pizza followed by a ‘Chocolate Nemesis’…followed by a trip to the cinema to see Paranormal Activity 2.  Arrrrhhhh! Scary.