Ben Vorlich… which way do we go?

Posted on October 9, 2010 by lornpearson

This morning we were up at the crack of dawn to climb Ben Vorlich.  We drove to Inveruglas and arrived just after 8am.  It was meant to be a nice day and I had my fingers crossed for conditions like we had this time last year up Ben Lomond (our first Munro).

We headed up the hill and followed a tarmacked track, which seemed too good to be true, for about half a mile then turned right up a fork.  A fork we should have really gone straight on at… anyway…

We did what we did and we went up the route we possibly should have come down.  The track got more trail like, then disappeared and we headed up the hill.  There were three guys about 20 minutes behind us so we figured we were going the right way.

We climbed up the path, passed some cows, and passed a quite intriguing wee cave.  It ended up, the guys were following us, believing we knew where we were going.  I’m glad they did.  We got to about 400m up and the terrain got a lot more challenging.  Long grass, no path and we were unsure of where exactly we were headed. 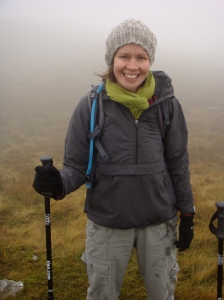 We stopped and put another layer on and waited for the three guys.  We chatted and they were very confident of where they were going – they even had a sat map (a clever little gadget that has OS maps in it and pin point where you are and shows you the direction you need to go in).

I figured with them behind us we would probably get to the top.  So after a wee rest we went up further.  Up about 500m it got really steep. On long grass and moss still, but now it was really steep – hands and knees stuff.  Hard work.  I didn’t realise how steep it was until I looked down.

The clouds were closing in, my feet were soaking, I didn’t know where to go…and looking up you couldn’t really see what was what.  I was tempted to give up but couldn’t face the climb back down from where we were from.  So the only way was up.  We were going straight up and we noticed the guys behind us had stopped….they were looking for directions on the sat map I think.  Then they whistled at us and directed us to go left up the hill. 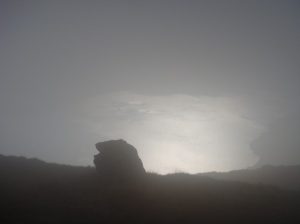 We followed their directions and finally got to a level part with some shelter.  It was really windy, but luckily it wasn’t raining – just cloudy.   We put another layer on and waited on the guys.  Colin came up first (in shorts by the way) and Eddie (with the sat map) followed.  Stevie the third guy had found the steep incline to be too scary and went around the peak we were on, but by the time we were up he was nowhere to be seen. It was really eery around us… the sun was breaking through the clouds at points making the whole area look strange.

We had a chat and Eddie suggested we stay with them.  I was more than happy to do that especially as Eddie had the sat map! We waited a bit for Stevie, then Colin hung back a bit and Eddie decided him and us would go on.  Colin shouted for Stevie, but he was quite confident Stevie would get back down to the car – so came and caught up with us after a while.

It was good to have the back up of the sat map and also to have ‘elevation’ on my garmin.  I’d set it up to show elevation as we were driving up and it was good to know how many metres we had to go (especially as we couldn’t see the top!)

After a long ascent, we ended up around 900m up … about 40m from the top… and eventually we got there.  Phew!  (And we found the path we should have come up!!) It was very windy at the top so we went down a bit and had a bite to eat.

We followed the path down and back to the nice tarmacked path.

It was an experience… 5 hours of hard work.   but we had good banter with Colin and Eddie and I’m so glad we met them!! (If we hadn’t we might still be up there!).  Almost 9 miles walking and home to a nap and dinner.

Note to self: Must get Santa to buy me a new pair of good waterproof walking boots before the next munro climb!